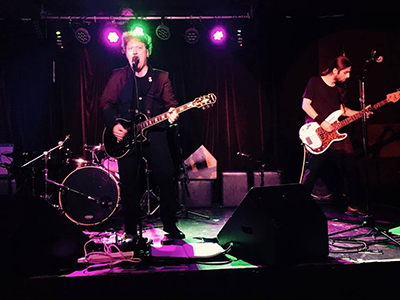 Elegant Decadence re-launched with their first of four planned live act nights at Nambucca in North London. And the acts they selected for the evening were all pretty much on good form with opening act In Isloation setting the mood, and Cold In Berlin closing the night with a much harder rock sound.

Sandwiched in the middle were Nottingham based band Luxury Stranger. Not their first time in the Big Smoke, and it’s good to see them return for another hugely enjoyable set. Front man, Simon York has been busy working away on his now third album which is fast approaching, and the set delivered tonight showed that even with a member or two missing from the live set that they can still deliver the goods.

Upcoming single “When The Lady Takes The Blame” appeared mid-set, but they saved two crowning glories for the end (namely “Side Of the Road” and “Diver”). “Side Of The Road” gets loud and thrashy right in its mid-section and is so powerful that you hope for it to go ballistic towards the end, but instead it settles down to a more gentle end. Despite a yearning for the raw power again, this was probably good for “Diver” which would have had a lot to live up to. But it brings its own charms and took the band to the end of a very engaging set.

Never a dull moment with Luxury Stranger:  Come back soon!