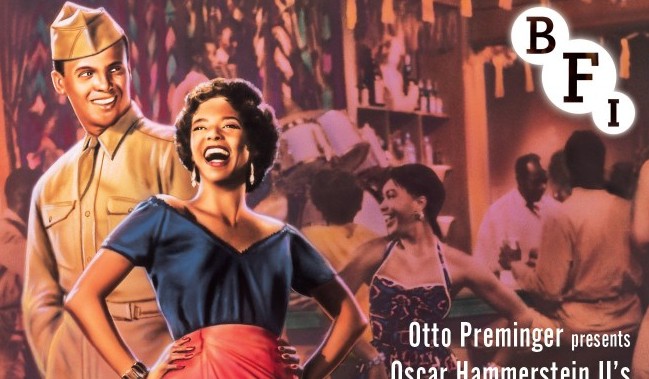 The film opens with the credits and the Carmen theme, before turning to a dirt track road and a nice young girl arriving at the army centre where her boyfriend is waiting to be graduated to flying school. Cindy Lou (Olga James) meets her beau, Joe (Harry Belafonte) and stays with him for lunch at the canteen. There is also a parachute factory there with women working in the factory, one of whom is the sassy Carmen Jones (Dorothy Dandridge). Seeing that Joe is sitting with Cindy Lou, Carmen flirts around Joe (while singing the main theme and song from Carmen). Carmen then starts a fight in the balloon factory and is arrested by the sergeant on the base and orders for her to be handed over to a local sheriff some 50 miles away. He orders Joe to take her. Joe is upset at this order as he only has a 24 hour furlough with his girl before graduating to flying school. There is a character here that is often dismissed when this film is discussed and that is the sergeant. A couple of times in the film the sergeant is an active obstacle to Joe and twice is the key to sabotaging his plans. Joe is clearly upset and drives down the dirt roads at pace. Carmen sees her opportunities to escape out of the jeep on a passing train and even causes their jeep to crash, further disrupting Joe’s plans. Joe agrees to let her go and take her to her shanty Louisiana home community where he stays the night. The next morning he wakes to find she has left a note and disappeared again. This results in Joe spending weeks in the stockade. Meanwhile, Carmen is brooding over Joe in a country nightclub. After Pearl Bailey sings the wonderful ‘Beat Out Dat Rhythm on a Drum’ the boxer Husky Miller arrives and flirts with Carmen offering to take her to Chicago. Joe arrives, released from the stockade and agrees to go with Carmen to Chicago and thereby desert. This is where Joe’s problems really starts.


Carmen Jones is a film that broke the mold in many respects, if not in the sense of a filmmaker’s technique, then in a political one and in doing so makes a very bold statement. Don’t forget that this was made in pre-Civil Rights America. You won’t see a single white face in the film, not in the army barracks, the city or the boxing arena. This is also a very gritty film, belied by its bright Technicolor. To be seen in black and white would have given that grittiness. From the army barracks, the southern shanty community to the run down Chicago apartment to the smokey atmosphere of the gym and the boxing fight there is a run down seediness, most especially played out in the Chicago one room apartment where the wallpaper is damp, the flat rundown and the kitchenette blackened. Meanwhile, the L trains shake the room each time the train goes by. This apartment is the pivot point where Joe snaps and Carmen changes her allegiance; Joe is a prisoner in this apartment.

What is really bold about this film is not only that this is a black only film but also that it has taken Bizet’s high brow opera and transposed to the African American south and Chicago. It does this very well and still manages to have the gloss of an MGM musical. It makes so many grand statements such as the then daring sexualization of Carmen. There are many scenes such as in the Chicago tenement apartment where there is a strong sexual chemistry and perhaps did not face the wrath of the Christian right or the moral guardians, perhaps because they are black. Another element that is often missed is the excellent performance by Belafonte. Now better known as a singer he was trained as a method actor. From the beginning to the end of the film it is clear the descent into madness for Belafonte’s Joe where he starts as a handsome soldier to the mad wiry face at the end of the film. Amazingly though, despite his qualities as a singer, his voice in the film was dubbed by LaVern Hutcherson; Dandridge’s voice was also dubbed. Directed by Otto Preminger, a director known for being a tough task master it is quite a daring film in many ways and it clearly needed someone of Preminger’s bombast to push this through. It is clear that despite Carmen being a femme-fatale and the person who vamps Joe, Preminger sees the point of view of Carmen.

There are not so many extras on the film, but there is a very good oral essay by Karen Alexander and while only short at 8 minutes gives a very good view of the film. In addition there is also the hour long Guardian Lecture done in 1996 with Harry Belafonte. There is also a good, albeit brief essay booklet by Chris Fujiwara. On Blu-ray the film looks bright, clear and fresh. It was one of only two films that Preminger shot in Cinemascope and is shown anamorphised to fit on the screen. As a film it is a revelation and one worth seeing.