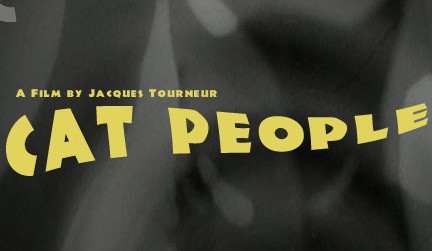 Way back in 1981, back in the days when I was still at school and BBC2 used to host horror double bills every Saturday over the summer, the first film during one season was a series of Val Lewton chillers. Initially horror fans would be surprised at the lack of monsters. Yet after viewing any Val Lewton produced horror film there would be a time to reflect and think there are few films viewed that delivered such suspense. Lewton and his director on this film, Jacques Tourneur built the suspense, the monster was suggested and the psychology palpable in an almost film noir style in each film.

The troubled pain of the main protagonist in Cat People (1942) is not really too different to that of Lon Chaney Jr.’s Larry Talbot in The Wolf Man made the year before. But there was still a strong gothic element in Universal’s film and one of the last monster’s introduced into the studio’s original horror film cycle. Cat People opens with a mysterious young woman sketching a panther in the Central Park Zoo. She attracts the attention of an architectural draughtsman called Oliver Reed (no not that Ollie Reed – he would come along some 20 years later) played by Kent Smith. He begins chatting her up and walks her home. He is intrigued by this unusual woman called Irena (played by French actress Simone Simon) who talks to him about her Serbian background and that the village she comes from was cursed by witches who turned people into cats during the Medieval period. Naturally (within 10 minutes of the film) they fall in love and marry. At their wedding celebration she is confronted by a mysterious woman who calls her sister in Serbo-Croat and departs. This, for Irena is a bad omen. Over the course of the next few months she grows obsessed by the idea that an evil cat resides inside her. She believes that the evil coming out and her transforming could be triggered by sexual passion or jealousy and so the patient Oliver is living in a sexless marriage. He even puts her onto a psychoanalyst (Tom Conway) suggested by Alice (Jane Randolph), one of Oliver’s work colleagues and best friend. Oliver is also beginning to fall for Alice in the middles of this mess. Irena is setting up for a jealous showdown with Alice.
As can be figured from the beginning synopsis of the film there is not yet any actually any horror, but instead the driver relies on psychological drama. But for Lewton and Tourneur this is merely the set up. Clearly Lewton’s films were influenced by Alfred Hitchcock. After Hitchcock would use psychoanalysis as the centrepiece to Spellbound (1945) and would later be clearly influenced by Lewton’s style and set-ups in Vertigo (1958), Psycho (1960) and The Birds (1963). (There is even a key pet shop sequence in Cat People, as there is in The Birds.) The two key scenes and those that would be emulated in many a modern horror film are the scene where Alice has finished work and is closing up the office. She heads to her club and finds herself alone in a swimming pool where she is frightened by shadows and the large looming shadow of a panther. In another scene Alice is walking home after work close to Central Park when she feels that someone or something is following and stalking her. Suddenly we are jolted by a bus pulling up and its pneumatic doors opening, sounding almost like a big cat’s hiss. Lewton and Tourneur take their time to set up the suspense in these sequences and are in no hurry for a bunch of scares. This trope is all too often used in modern horror films where a scene of suspense is set up for the jump to be created by something innocent. This technique is now called the ‘bus’ and Lewton’s film was the first to use this. And again, unlike Universal Cat People was most evidently set in a modern urban setting, despite its reference to a Medieval central European past.
The origins of Cat People lay with the budget action studio behind King Kong (1933), RKO. The studio, like Universal was a second player that was reeling from the massive financial losses of some Orson Welles projects, including (the now classic) Citizen Kane (1941). The studio brought in an intelligent and learned Russian emigre called Val Lewton and was tasked to make a series of low budget horror films to challenge Universal. Lewton felt that horror films were beneath him. All he was given was a title: ‘Cat People’, no script and no other clue. Lewton brought in screenwriter DeWitt Bodeen and French emigre director Jacques Tourneur. Between them they worked on the idea and came up with a film that was not sensational horror in a B movie sense (there were many Poverty Row studios in the 1930s/40s such as Monogram and PRC churning out these kind of efforts). Also on board is the cinematographer Nicholas Musuraca who gives a noirish, smoke filled atmosphere to the film. It most certainly does not look like a B movie. Elsewhere the film’s subtleties are played out such as the scene at the restaurant wedding party where an elegant Serbian lady is made to look both mysterious and feline like. All through the psychology is palpable and it was only at the studio’s insistence that Irena is a real cat woman and not imagined.
Over the next four years Val Lewton would make a further eight what could be termed horror films and would repeat, to a lesser or greater degree he did in Cat People; two further films including the brilliantly titled I Walked with a Zombie (1943) would be directed by Tourneur. The latter film was also written around a mere title and also co-starred George Sanders cheaper brother, Tom Conway who plays the psychiatrist in Cat People. As with most of Criterion’s releases there are plenty of extras including a 1977 interview with Jacques Tourneur and a feature length documentary on Lewton produced by Martin Scorsese. For a long time now few of Lewton’s films have been available and therefore it would be great to see more released.
Chris Hick
Share
Tweet
Pin
0 Shares