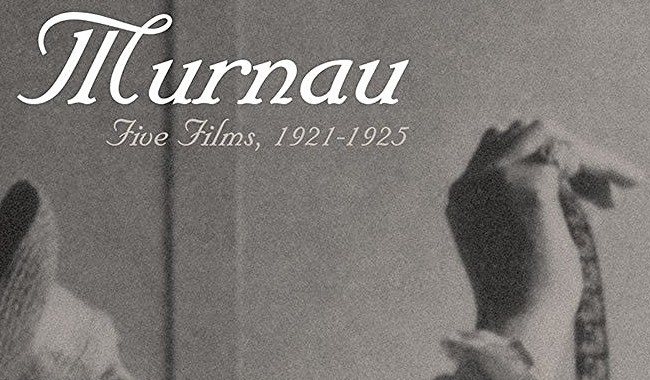 The latest release from Eureka! is ‘Early Murnau – Five Films’. All the films included have also previously been available through Eureka! on their Masters of Cinema label previously and are presented here re-packaged. The collection represents the German director’s films from 1922 – 1925. The title, however, is a little misleading as it doesn’t represent his earliest films and is really mid-career before he was lured to Hollywood in 1927 to make his masterpiece, the once neglected Sunrise (1927); a film that is now considered at the apex of what cinema was capable of before sound came along. However, the German émigré director did not live that long to make many more films, killed in a car crash in 1931, aged 42 in Salinas, California – not far from the location where James Dean would be killed some years later. He was driving the car when he agreed to allow his young male Polynesian lover to take the wheel. The man could not drive properly, swerved the car and crashed it. As fate would have it Murnau was the only person to have been killed in the crash. The director had recently returned from the South Seas following the completion of his final film, Tabu, a semi-documentary he made with the well-known documentary film director, Robert Flaherty.

F.W. Murnau was born Friedrich Wilhelm Plumpe in Bielefeld in Germany. In the First World War he was a flyer who had been shot down several times, the final time in Switzerland where he was interned for the remainder of the war. He began directing films in 1919. Little is known of his first seven films as they are all presumed lost, including Der Januskopf (1920), one of the more celebrated lost silent films from Germany. The earliest film extant by Murnau is the only relatively recently discovered Schloß Vogelöd (or in its English language title, The Haunted Castle) made in 1921. Often mistakenly referred to as a horror film it is in fact a melodrama with thriller elements, more Agatha Christie than anything else. The story concerns invited guests to a castle for a weekend and a dinner party. Many of those present believe that the host has killed his own brother. Frankly there is little evidence of Murnau’s style as a great director evident and the result is a fairly dull affair, although he does use the sepia tones to good dramatic effect. The next film on the 3 disc set is Phantom (1922), again not a horror film, despite the suggestion of the title. The film is a little overlong but concerns a clerk (Alfred Abel) who becomes obsessed by the woman who accidentally knocks him down in her horse drawn carriage. There are seeds of the later Murnau here with its use of shadows and a dream sequence, including the very Expressionistic leaning houses with the director able to treat the theme of paranoia with some effect. There is also a very interesting German made documentary concluding disc 1 focusing on Murnau’s early films.

There is one film not included on this set of discs, and a most definite glaring omission it is too. That is the classic Nosferatu, or to give its full title, Nosferatu, eine Symphonie des Grauens (1922). Nosferatu was recently released by BFI and therefore Eureka! were unable to get clearance to release it. Nosferatu is probably the best known and certainly most iconic of all of F.W. Murnau’s films. The 2nd disc opens with another melodrama with thriller elements: Die Finanzen des Großherzogs (The Finances of the Grand Duke) (1924). This film is different in that most of it was shot on location in bright sepia tints. It was mostly shot on the Croatian (then Yugoslavian) island of Rab and also in Split. The plot concerns the rather flippant carefree Duke of the Ruritanian make belief state of Abacco. He has allowed his Mediterranean state to get into financial straits and aims to marry Olga, a Russian Grand Duchess but is prevented from doing so by her wary father. The marriage would end his financial difficulties. But while he is away trying to woo Olga revolutionaries declare it there state. Again not a hugely interesting film but the quality of this restored, once thought lost film is impeccable, bringing out the best of the Dalmatian coastal locations. The first film in this collection of any real merit is Tartuffe (1925) and starred the most celebrated of all pre-Nazi German actors, Emil Jannings (who continued acting under the Nazis in several of their propaganda films). The story is adapted from Molière’s play of the same name and follows a rather ugly housekeeper who woos her master in order to deceive him out of his fortune. Murnau keeps the plot simple, jettisons many of the peripheral characters and sticks with the principles in which the housekeeper is shown a morality play that reflects and points a finger of accusation at her. Again, shadows play an important part in creating the atmosphere.

The final film of the 5 on the 3 discs is arguably Murnau’s best film until Sunrise, Der Letzte Mann (The Last Laugh was its UK/US title). The story is simple, but powerfully told with Murnau paying attention to every detail of the film. It is an unashamed masterpiece. The film follows the downfall of an ageing but proud doorman of the Atlantic Hotel in an unnamed city. He is almost like a primped peacock and proud of his role, wearing his braided uniform with pride. However, the hotel manager seems to have a dislike for him. One day he arrives at work and finds that a younger (peacock) has taken his place. The manager uses the doorman’s age as a reason and demotes him to toilet attendant with just brown overalls as a uniform. We see the former doorman become stooped in appearance as if he is ageing before our eyes after this. German film historian Lotte Eisner famously said that you’d have to be German to understand this film and the German’s militaristic love of a uniform is it’s driver. She was saying that we are to both sympathise with the old man and damn him for his puffed up ideas about a uniform. What better actor than Emil Jannings to return to a Murnau film. No actor played the downfall of an individual better. Later he would play opposite Marlene Dietrich as the humiliated love forlorn professor in Germany’s first sound film, Josef Von Sternberg’s The Blue Angel (1930). In real life he allegedly held his Oscar high among the ruins of his house when Berlin was liberated by the Allies at the end of World War II. As the brilliant ‘Making Of’ documentary’ accompanying the disc attests to, every aspect of this film was considered and even broke new ground in movie making. It was the first film to use dolly tracks for the camera, optics, a form of steadicam and even the city street was cleverly constructed on the UFA set to make cardboard cut-outs look real.

Der Letzte Mann (1924) is the highlight of the collection. Jannings would return to make one other film in Germany with Murnau in the equally ambitious Faust (1926) (also available through the Eureka! Masters of Cinema label) before the director was lured to Hollywood. These films don’t represent Murnau’s early career, so much as the middle part. By the time he made Der Letzte Mann there was a clear maturing of the director’s style and inventiveness that may be missing from some of his earlier films but it would be good if films like Der Januskopf would show-up someday. A solid collection of films with a good accompaniment of documentary material.