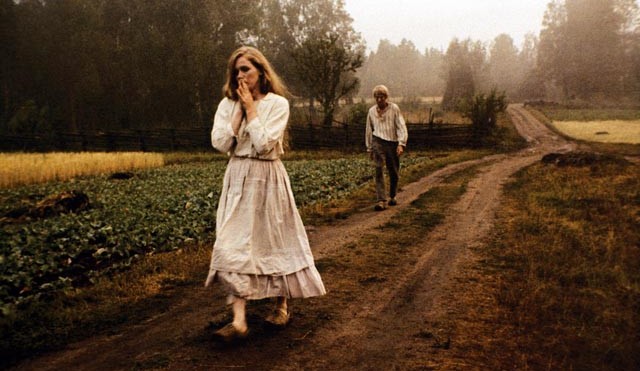 Released by Criterion Collection is the Swedish family saga, The Emigrants and The New Land, here presented as an epic double feature totalling 6½ hours. The Criterion Collection has for several years been the elite film video distribution company from the USA that has focused on licensing “important classic and contemporary films” aimed at cinema aficionados. However, the last couple of years the studio has made a welcome extension to the UK. At first the length of both these films together may be either daunting or off-putting. But don’t let that stop you from watching. It was directed, co-written, shot and edited by Jan Troell and made by Svensk Filmindustri (released in the USA and UK through Warner Brothers), this is a directorial masterpiece. Be under no illusions, despite being made by SF and starring Max Von Sydow and Liv Ullmann, this is most definitely not an Ingmar Bergman film but one that Troell imprinted his own particular stamp upon. For the introduction of the film, Swedish film expert John Simon states that there are two filmmakers who have effectively re-created the hardships of peasant existence: one is the Italian director Ermanno Olmi, the other is Troell.

The first film, The Emigrants opens in 1844 in Småland where the Nilsson family work the land as farmers. The eldest son on the farm is Karl Oskar (Max Von Sydow) who begins dating Kristina (Liv Ullmann) while a brother, 14-year-old Robert (Eddie Axberg) works on another nearby farm and dreams of getting away, leaving the community and emigrating to North America. Kristina and Karl Oskar marry to ensure the continuity of the farm. Over the next few years they have four children, two boys and two girls. Poor harvests and working the hard rocky land lead Karl Oskar, who is also fighting against religious dogma also has the same dream as his younger brother, but Kristina does not want to leave the community. When the eldest daughter dies after eating bad food Kristina agrees to the move to the New World. Along with others in the nearby community they plan and pay for their passage, travelling to a port by cart and board a ship bound for the United States. All the passengers are herded like cattle for the 10 week journey. The passage starts off well but disease, lice, weevils and maggots soon take over the ship. In addition there is also sea sickness and rough weather. Kristina also falls ill and almost dies. Once they arrive they must also travel across land and by steamboat to Minnesota where they hope to claim fertile land and settle.

The New Land opens in 1860. Karl Oskar has found a beautiful, tranquil and fertile piece of land by a lake in Minnesota. Over the years he turns the fertile land, builds a home and later an even bigger home with his own hands with help from his brother. They are also wary of the local Indian tribes nearby who learn to live together in a mutually tolerant understanding of mistrust. A short while later Robert and his friend Arvid harbour plans to leave and trek to the Californian gold fields they have heard about a land of opportunity there. He tells his brother of his plans before leaving. Of course for the Nilsson’s to establish themselves is a struggle that is not helped by the approaching Civil War. Karl Oskar enlists into the Union army much to the chagrin of Kristina, but is rejected as he has a limp. Meanwhile, neighbours are moving in to nearby land, but are rejected for their religious dogma (many Swedes emigrated to the US because they felt that their ultra-conservative beliefs were being suppressed by the State). One day Robert returns from California weak with rotten teeth and without Arvid. This is where the film tells dual stories. Despite Karl Oskar’s lack of belief in Robert’s story he explains that they trekked with great hardship across the Great Plains and the West through territories of Yellow Fever and deadly deserts in search for the so-called Utopian gold fields. But Robert has a lot of money that he gives to Karl Oskar and Kristina. It turns out Arvid had died in the desert after drinking poisoned water. The hardship never seems to end for the family as they face further hardships and death as well as marauding Indians in the Sioux Uprising of 1862, all brilliantly and realistically told by Troell.

Both these films have almost been forgotten about in the annals of time. It is not remembered the same way as many of say Bergman’s films have. But The Emigrants received four Academy Award nominations for the 1972 Oscars, including Best Actress, Screenplay, Director and Best Film, losing out to The Godfather in most cases. It also moved Ullmann and Troell to the Hollywood temporarily and propelled Max Von Sydow to playing the priest in The Exorcist. Yet these films demand to be seen together and as a pair are worthy masterpieces. On one of the extras on the disc, Troell explains that he had to make certain concessions and cuts to the film in order for it to get a US release. Yet this epic turns the mythology of the Old West on its head; markers and signposts of settlers and frontiers folk that we have been used to. If we can recall Shane (1953) where the settlers are persecuted by gunslingers or The Searchers (1956) the Arizona settlers who are massacred by Cheyenne renegades. Yet, despite how good both these films are the storytelling and the tragedy that unfolds in The New Land feels more realistic, harrowing story of survival; none more so than in the vignette towards the end of The New Land in which a nice family of settlers are slaughtered by the Sioux. The less said about this harrowing scene the better. However, Troell is not painting the Indians in a bad light but is able to give as tragic a story to both peoples (“I guess they preferred bread to Bibles” one settler retorts to Karl Oskar).

Together these films form a convincing record of how the experience of settlers might have been. The extras on the disc are plentiful and include interviews with Troell and Ullmann as well as a comprehensive making of documentary. These films demand to be seen together and are an extraordinary example of filmmaking for both direction and performance. When you see Ullmann and Von Sydow either in close up or long shot their thoughts and emotions are constantly written on their faces. This was a director who clearly trusted his actors and did not push them but let them perform. Such shots as the family leaving the parents behind in Sweden in The Emigrants in a long fade-out is an example of Troell’s genius as a filmmaker.