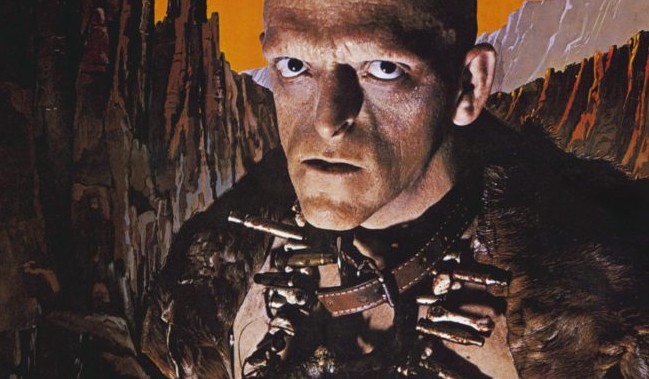 The Hills Have Eyes Blu-ray Review

There are cult films and there are cult films. The Hills Have Eyes is among the latter. Released in 1977 it became an instant cult success. This was further helped by the boom in Home Video in the late 70s and early 80s, often highlighted as a must rent film for horror fans, a new generation of which sprung up with the mass release and re-release of horror B films from the 1970s. Films like The Texas Chainsaw Massacre (1974) were among those that had a second life due to Home Video. Director Wes Craven had previously made another cult nasty on a low budget, the brutal home invasion horror The Last House on the Left (1972) which was made for next to nothing and among cult midnight horror film fans assured director Wes Craven’s notoriety.

The film is shot and set in the Nevada desert with the central victims being a family of eight plus two dogs driving in a car pulling a trailer caravan that breaks down at a gas station. There they encounter a grizzled old man who works at the station and is seen speaking to a young feral girl called Ruby who admits that she’s not supposed to be there and might incur the wrath of her family living hungry in the hills. The old man warns the family to stay on the road and, that it is dangerous to divert from it (queue classic horror lines: “stick to the path”). Ignoring the warning, the father is driving too fast and crashes the car breaking the axle. Stranded, they find themselves near an old military testing ground without any radio communication (as this is the 1970s they do have a CB radio). The two Alsatian dogs become jumpy one running off only to be found later mutilated. The father heads back to the gas station and arrives at night fall where he finds the old man has been brutally assaulted and attempted to hang himself. He manages to tell the father to be careful of the family of cannibals that live in the nearby hills. The father is then taken by the gang, tortured and partially eaten by the cannibal family before his body is brought to the stranded family and burnt before their eyes. Over the night and the next day the family of cannibals continue to assault the family, attacking and murdering them one by one and kidnapping their baby in another example of Craven’s sub-genre home invasion theme. Those left of the family attempt and plan to fight back.

Wes Craven is also drawing on another sub set of horror films, the cannibal film which appeared from Italy in the 1970s that had begun with The Man From Deep River (1972) and led to such notorious films as Mountain of the Cannibal God (1976) and Cannibal Holocaust (1981). The Hills Have Eyes took the sub-genre to a different league but viewed today the film does seem less shocking than it did when it came out and even in the 1980s when it was still popular in the video market. The origins of the story comes from the legend of Sawney Bean who had led a family of cannibals living in the Scottish Highlands in the 17th century. It had been five years since Craven had made his last film, The Last House on the Left. He was not interested in making another horror film but was now broke and took up the offer with twice the budget he had from his last film. The cast and crew lived in the desert while they were making the film under fairly harsh conditions. The cast was made up of largely unknowns, with the possible exception of Dee Wallace (who had later go on to star in The Howling, 1981 and Cujo, 1983). The ‘family’ are a villainous bunch of feral creatures all, except Ruby are named after Planets, Jupiter, Mars and Pluto (played by the iconic egg head shaped Michael Berryman).

The film is not as shocking today as when it came out, nor is it really all that original but it certainly captured the imagination when it was released and in many ways, despite the sometimes dodgy acting is most assuredly a cult classic. The extras are bountiful ans includes an alternate ending. What has not been recovered and probably never will are many of the suggested cuts. The Making of documentary brings together many of the cast and crew including Craven, producer Peter Locke as well as most of the cast. What is distinctly noticeable is how young everyone still looks or at least still recognisable. Arrow Video have typically gone to great lengths to showcase the film as thoroughly as possible including presenting it as a 4K transfer, commentaries, 6 postcards, a Making of documentary, outakes and other interviews. Another great choice from Arrow Video.