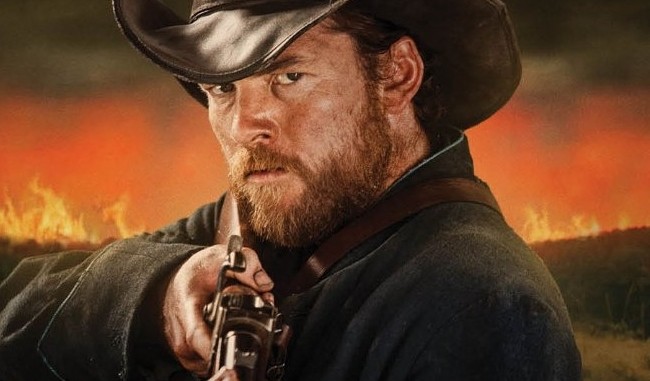 A story about southern women on the home front during the American Civil War brings two films to mind: Gone With the Wind (1939) and Cold Mountain (2003). In the former, Scarlet O’Hara’s dogged determination to defend her home Tara from the advancing Yankees during the siege of Atlanta is still powerful. In Cold Mountain Nicole Kidman plays a North Carolina woman called Ada who struggles to survive through the war while her beau is off fighting for the Confederates for the entirety of the war. The Keeping Room has none of the epic scale of either of these films; there is no burning of Atlanta (although the distant glow on the horizon as Sherman’s army advances does hint at this) or battle scenes like in the latter film. But in a microcosm The Keeping Room shows a very human story with only a handful of characters.

Set in 1865, the establishing shots of the film are effective. We see a black woman walking down a dirt road whistling. She comes across a dog growling at her. She growls back, mocking the dog. The woman then notices a stagecoach with a black man in fear sitting on top. Suddenly there is movement and a woman runs, her torn clothes and under garments suggest that she has been raped.She screams and then is shot in the back. Within seconds the two perpetrators appear. They are both Union “boomers”, that is they are advance foragers who are seeking out what is ahead that they can take for themselves. Cut to a burning stagecoach and the man slumped dead on top and the black woman having also been shot dead (in simple terms bear in mind that the Union were supposedly fighting the war to end slavery from the rebellious South). The film then turns to the main protagonists of the film, three women struggling to survive and continue to toil the land. They are two sisters, the elder stronger blonde haired Augusta (Brit Marling) and the younger fragile Louise (Hailee Steinfeld). There is also a black maid, Mad (Muna Otaru) who is loyal to the sisters despite an often fractious relationship. There are no men folk around. Augusta goes off for supplies and stops at a house in which she knows the occupants. The house appears deserted when she finds her friend dead in an armchair with flies all around her now stinking corpse. Augusta then goes to a saloon where there is a brothel and get some supplies (she tells one of the women there that she is a virgin). That’s when the two individuals we met at the films open arrive and lust for the women (the senior of the two men, Moses is played by Sam Worthington). Augusta escapes out of a back window and the other woman punches out one of the men. We later see that the few people in the saloon are killed. Augusta makes it back home where Louise has injured herself. That night the two “boomers” lay siege to the house and their three women try to defend themselves.

The film has a level of realism that is moody and actually quite depressing. It gives a very clear picture of the horror of war. We don’t see any battles and only at the end when we see the advancing Union troops of Sherman’s army do we get any other indication of war beyond its lawlessness. Earlier Moses had warned the women that when the soldiers arrive “Uncle Billy [the Union Army]’s coming, burning down everything in his path. Rest assured, it will be cruel.” All we have seen up to this point is the de-humanization of a couple of individuals and the fear and the presence of death in others. Again, Gone With the Wind comes to mind. Scarlet comes home to find her dead father and her beloved house ransacked and in ruin. She stumbles across a drunk Union soldier and shoots him in the face. This scene was deliberately quite shocking for the time and was hugely effective showing how the stubborn determination helped Scarlet to survive the war and overcome. Sometimes the dialogue is a little too softly spoken but the sound of the gunshots are incredibly loud and will lead the viewer to jolt if they had turned the sound up (as I did). Also, like the scene with Scarlet in GWtW the film is deliberately violent and demonstrates well the de-humanization of war; there is one scene where Augusta and Moses confront each other and there is a sense that the director is trying to create chemistry between the two. Given the context of what we have seen up to this point this seems a little crass and unlikely. Never the less The Keeping Room is a good film that sadly saw an all too limited release. This is director Daniel Barber’s second film. His first, Harry Brown (2009) starred Michael Caine in one of his grittiest films for a few years as an ageing ex-serviceman living in a South London council block where he and his elderly friend are facing siege from drug gangs. The parallels are quite strong given the differences in times and location.

A notable extra on the disc is a 10 minute Making of documentary following some of the films shooting.