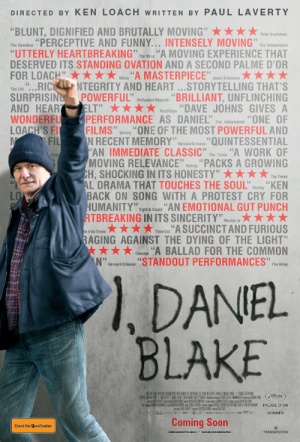 Ken Loach is out of his some what retirement to bring us a film with a real message, one that needs to be taken on board. Being forgotten, lost in the system that refuses to work is the base of I, Daniel Blake, and it is a daunting prospect to manoeuvre. But Loach, as talented as he is, manages it to a staggering degree.

He is helped by Paul Laverty’s intense, angry script which moves through the paces in a way we haven’t seen in quite some time. It’s unrelenting, it’s real, and it’s tough. It’s a tough watch, but an important one. And it runs through swimmingly and with increasing depth as the film makes it’s way to the climax.

A lot of this has to do with his stars, as the leads are superb here. Dave Johns and Hayley Squires fail to misstep here, in what may be one of the most important films of this year. Johns plays the titular character, a widower who has suffered a heart attack, and is in a weird limbo of being unfit to work by way of his doctors, but the state have decided he is too fit and able for Support Allowance.

He is a man from a different time, before online and digital were the norm. His closest friends outside of his work is his young neighbour, who he treats like the child he never had. But at his core, Daniel is a nice, genuine man. One who you root for, in this David v Goliath story that he may not win.

The problem with the system is that he is not even trying to win. Blake is trying to win the right to appeal to win. Try as he may, hurdles are thrown at him at every junction, and only Blake’s obtuse humour is keeping him in check.

He soon meets a young single mother of two kids, stuck in a similar situation in that she too is trying to best a system which, for all intents and purposes, is built with the state in mind. They form a bond, again Blake becoming a father figure, clearly a role he was born for but sadly never got to undertake in it’s true form.

There are some dreadfully moving scenes on display, none more so than one in a real food bank in Newcastle. Squires’ young mother Katie is an amalgamation of many people she came across in her research, and it’s important to know that the biggest scenes in this film all really happened to real people, stuck in this weird benefits limbo.

It’s awful, in the best sense. Loach and co have stressed that this film be used to help showcase the issues which are very real in this country, that tend to go unnoticed. The ghosts of this story are all very real, and they will haunt everyone who watches I, Daniel Blake.

Make sure you watch I, Daniel Blake.