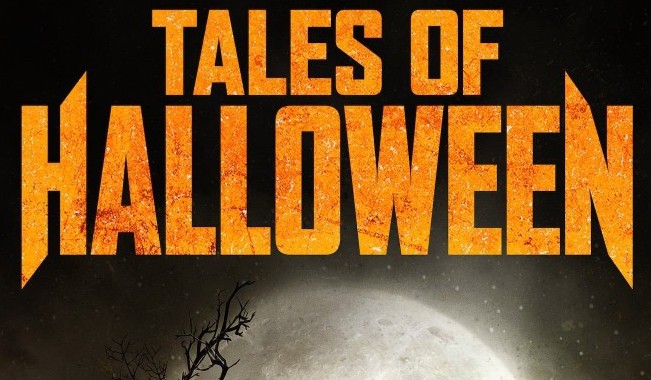 Halloween is almost upon us once again. It is a holiday that is becoming more and more popular in this country and, dare I say it commercial. In the United States it’s the start of the holidays, leading to Thanksgiving and then Christmas, with a month in between them all. What more appropriate time of the year then than to show a horror film or three. Unsurprisingly John Carpenter’s original Halloween (1978) of course is a staple as are many other horror films. One of the most discussed films at Frightfest 2015 in London was Tales of Halloween, a portmanteau of 10 short horror films from different directors, most of whom are little known or first timers. Like any multi-story films, they can be patchy at best; not all the directors, writers and films can be on the money. Trick ‘r Treat (2007) is an example of recent portmanteau Halloween films that are coming onto the market. As ever with films of this type, Tales of Halloween has a few standouts but there even more duds.

The film opens with Adrienne (The Fog) Barbeau as a DJ in a small town reminding all her listeners that it is Halloween and for happy trick or treating. All the shorts within the film are supposedly set in one suburb. The first short is directed by Dave Parker and is titled ‘Sweet Tooth’. It has a pair of teenagers looking after the girl’s younger brother. The boyfriend tells a story of how a family was massacred for eating a child’s Halloween candy, naturally scaring the boy. After the boy goes to bed the young couple eat all his candy and finds themselves murdered by a demon who literally rips their guts out. You can see where the film is going with the manner of its storytelling – right to the jugular. Many of the tales are humorous, all are focused on Halloween and all employ the usual horror traits. Some of course are a dirge to get through, even if they are all about 10 minutes long. The best stories are the ones that most effectively or even ironically use typical horror tropes. One of the wittier stories is called ‘Friday 31st’ which starts with a girl dressed as Dorothy from The Wizard of Oz (complete with ruby slippers) chased through a wood by a machete wielding deformed crazy. He seems to be relentlessly chasing her like Leatherhead in the climax to The Texas Chainsaw Massacre. She runs into a barn where she finds a pile of dismembered corpses. Taking its influences from the likes the Halloween films, Friday 13th franchise and The Burning, the deformed killer of cause gets his teen victim. All of a sudden a (stop animation clay moulded) alien, no higher than his ankle arrives and in a sweet baby voice holding a Halloween bucket asking for candy (“twick or tweet”). The bogeyman’s response: stamp on the alien. The alien’s spirit goes inside the lifeless corpse of Dorothy, brings her to life and gets its revenge. In another story neighbours fight it out, literally to the death as to who has the best Halloween decorations. Elsewhere a mad witch and a flesh eating pumpkin are just too silly.

By the far the best short of the lot is called ‘Grim Grinning Ghost’. This one is written and directed by Axelle Carolyn and has a paranoid woman who is driving home on All Hallows Eve and believes that she is being stalked by a malevolent spirit. It draws on all the clichés and does it well because it keeps the viewer guessing right to the end of this segment as to when the scare moment is coming. Many of the tales may elicit a ‘whatever’ kind of response but the ones that are good and would be served sharing on social media or as stand alone shorts. There are a couple of horror names thrown in to raise the film a little more including appearances by John (An American Werewolf in London) Landis and Joe (Gremlins) Dante. What all these films do have in common is that they would also make good horror comic shorts, probably in many cases more successful than they do films – with the possible exception of the aforementioned one by Carolyn that works best on film. I am sure that the aim of this film is to capitalise on the ever growing popularity of Halloween and if that is the case it’s a good idea. It remains to be seen how popular that idea will be. Released by Arrow Video on their Arrow Academy sub-label, the label should give this film a little more kudos. There are a handful of extras on the DVD and Blu-ray, including a deleted scene from ‘Grim Grinning Ghost’ for efficiency and storyboards from the aforementioned ‘Friday 31st.