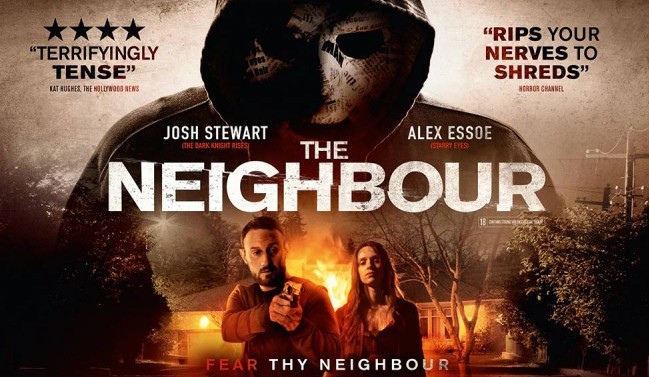 The Neighbour is set in Cutter, Mississippi, a rural back wood where people are suspicious of government and any strangers passing through. One young couple move from nearby to a new home. Johnny and Rosie (Josh Stewart and Alex Essoe) work shifting drugs for Johnny’s uncle, a rather nasty individual who runs a diner and and an apparent underground drugs operation. Secretly Johnny and Rosie plan to leave Cutter and head for Mexico with their earnings. The evening before the day they have chosen to skip town they receive a knock on the door from their middle-aged red neck neighbour, Troy (Bill Engvall). Troy invites himself in and makes himself comfortable on their armchair with a beer. He makes Johnny feel uncomfortable, more so when he salaciously looks at the young blonde and slim Rosie, commenting “we don’t get too many purty gals round these parts”. Troy has spotted that the couple have a telescope in their living room, ‘joking’ that he has one too, to spy on his neighbours. The next morning Johnny goes out to run some last errands before he and Rosie can disappear. When he comes back he finds Rosie gone and nowhere to be found. He suspects that his new neighbour, Troy has something to do with her not being around. He sees that Troy has gone out and explores his house. There he discovers a secret underground passage where he not only finds Rosie in a cage but others held their against their will where people are filmed and tortured to death. Troy then comes back with his two sons…
This film falls into the sub horror category known as torture porn, the most famous films within this sub-genre are argueably Saw (2004) and Hostel (2005). The film’s director, Marcus Dunstan has worked in this sub-genre many times which have included directing The Collector (2009) and its sequel, The Collection (2012). He was also the screenwriter on a number of sequels to Saw (IV – VII), but most of these are rather derivative and nowhere near as interesting as the original. In other words he comes to making this film with some well rehearsed credentials. Of course the idea of a twisted neighbour in ordinary surroundings is nothing new either in the real world or in cinema; think of Shia LaBeouf in Disturbia (2007) or Hitchcock’s Rear Window (1954). Dunstan suitably sets his film within a suspicious closed community, the large house itself reminding us of Ed Gein’s house in rural Illinois, the scene of missing persons found stripped of flesh, or even that of the film inspired by Gein’s crimes, The Texas Chainsaw Massacre (1974), argueably the godfather of torture porn horror. The two strongest scenes in the film are that of the uncomfortable conversation between Johnny and Troy in the former’s living room and the most tension the best scene in the film where music can be heard in the basement with Johnny covertly moving through the labyrinthine corridors. Again the viewer maybe reminded of other antecedents as Nicolas Cage discovers the snuff film den in 8mm (1999) or better still, Agent Clarice (Jodie Foster) with night vision goggles moving through ‘Buffalo Bill’s’ underground lair in Silence of the Lamb (1991) (again with metal music filling the air). Despite its lack of originality, Dunstan does show some talent in this genre with loyal Stewart having appeared in Dunstan’s Collector films and Alex Essoe as Rosie fresh from the recent Tales of Halloween (2015).
A new release by Arrow Films, The Neighbour is an aesthetically interesting film in which the lack of originality can be overlooked by its style. It will be interesting where Marcus Dunstan goes next if he pursues the horror genre. No extras other than trailers.
Chris Hick