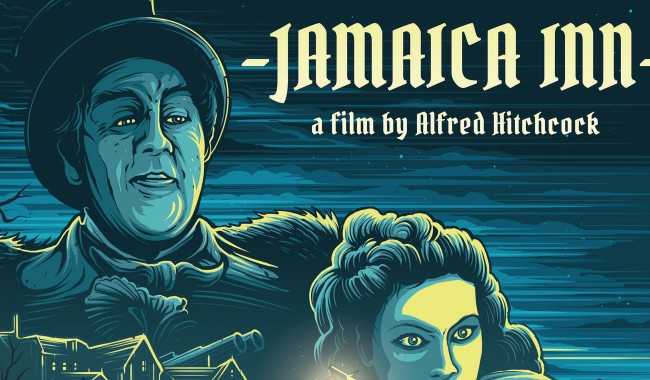 As unremarkable as it is, Jamaica Inn is something of a crossroads film for Alfred Hitchcock. This was his 24th film in Britain since his his first completed film in 1925. Jamaica Inn was made in 1939 before making his first film in Hollywood in 1940 (Rebecca); this is not to say that it was the last British film he made. There was the Australian/British production Under Capricorn (1949), Stage Fright (1950) and the brilliant and often underrated Frenzy (1972). Never the less, not only was this the bridge between this film and Hitchcock’s first Hollywood film but Daphne du Maurier also wrote the source books for both films, although she was reportedly critical of the interpretation of her novel. The production values for Jamaica Inn does have a nice gothic feel to it (as did Rebecca), but this was a project Hitchcock signed up for reluctantly and in many senses his heart not being in the project shows.
The film (and Du Maurier’s novel) is set on the Cornish coast in 1819. 19-year-old Mary (played by a young Maureen O’Hara in her first major film role and just before her own move to Hollywood) arrives in Cornwall. She arrives at her aunt’s inn, the Jamaica Inn of the title (and a real life pub on the edge of Bodmin Moor that is still open today) after her mother’s death. She finds that her aunt has married the crooked Joss Merlyn (Leslie Banks) who uses the inn as a base for his gang operation forcing ships to wreck on the Cornish rocks, kill their crew and steal the booty. Mary soon feels protective of her aunt and does not trust Merlyn. Mary also saves the life of one of the new gang members, Jem Traherne (Robert Newton) who the gang suspect of embezzling the goods. Merlyn angry at this betrayal orders the capture of both of them. Traherne and Mary narrowly escape with their lives and find sanctuary in the  grand home of local squire and Justice of the Peace, Sir Humphrey Pengallan (Charles Laughton). Unknown by Mary and Traherne Pengallan is the leader of the gang of smugglers.
Despite being the last film in Britain in this phase of his career and with a wealth of filmmaking experience now behind him, Jamaica Inn is not the best of Hitchcock’s early films. Part of the problem was Charles Laughton who (uncredited) co-produced the film. Laughton who had starred in such classic films in both Britain and Hollywood as The Private Life of Henry VIII (1933), The Barrets of Wimpole Street (1934) and in one of his best roles as Captain Bligh in Mutiny on the Bounty (1935). Laughton was a larger than life character. He dominates this film and during the making there was a clash between Laughton and Hitch. His domineering personality is apparent in this film as the squire. Laughton always played such roles in a camp queeny style. If not already apparent his homosexuality borders on the perverse in this film. His overly made-up look with the raised eyebrow make-up make him appear very much like a campy Dickensian villain. This campy acting was served more effectively for him in Otto Preminger’s Advise and Consent (1962) as the southern lawyer. Whether by laziness or his hand was forced there is a surprising lack of suspense from the Master of Suspense here; that Pengallan is the chief villain is telegraphed not only too soon (25 minutes into the film to be precise), but that we are neither surprised nor is there any big reveal. This is one of the films main let downs. However, as with any Hitchcock film there are some great moments or at least camera shots that are classic Hitch. One worthy of mention is where a tied up Traherne persuades Mary’s aunt to untie him. The next time the camera returns to the room we see the rope on the floor the chair he was tied to overturned and the aunt is just standing with the knife in her hand. Hitchcock would use Laughton again a few years later in The Paradine Case (1947). Laughton also had brought the young 19-year-old Maureen O’Hara to the film and as well as Hitch going over to Hollywood Laughton returned there with O’Hara to star together in The Hunchback of Notre-Dame.
Laughton was not the only producer on the film. The credited producer was Erich Pommer, a producer with extensive experience who had made many of the great silent German classics by Fritz Lang as well as The Blue Angel (1930). Some of that Expressionist style and influence can be seen in Jamaica Inn too as well as strong script work by Sidney Gilliat and Joan Harrison. The cinematography by Harry Stradling also contributes to some of the films stylishness. But this of course is an Alfred Hitchcock film and while far from being among his first rank films is an interesting diversion and historical piece. Released by Arrow Video from a 4K restoration made with the participation with the BFI on a dual format pair of discs the sharp imagery does show up some of the poorer production values including some wonky rocks in the sea, as well as some good backgrounds and matte painting. The only significant extra on the disc is a documentary and visual essay by Donald Spoto, author of the Hitchcock biography ‘The Dark Side of Genius’ called ‘Shipwrecked in a Studio’ looking at many of the aspects of Jamaica Inn.
Chris Hick