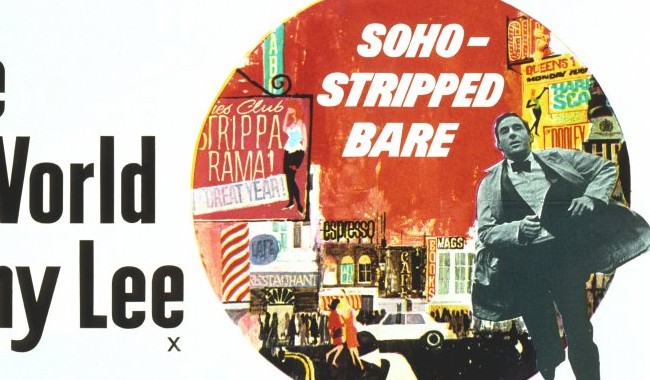 The Small World of Sammy Lee was made in 1962, released the following year and is set in Soho. In many ways that most different part of London, often engulfed in the generic term as being a part of the West End is very much the star of the film. During the opening credits of the film we see the camera track through the streets of Soho in the early morning, through the quarter’s litter strewn streets, down Peter Street, Old Compton Street, Dean Street and Berwick Street. What is interesting is how much of it is still familiar today, although many of the wonderful small Italian and other world restaurants have disappeared. The camera also glides past the Heaven & Hell and 2i’s cafes on Old Compton Street, the self-styled birthplace of rock and roll, both now long since gone. To highlight the importance the film’s locations play, there is an extra featurette on the disc which takes a look at all the locations used in the film. Also present in the film and given foreground is the disappearing seedy side of Soho, her strip clubs, peep shows and prostitution in what was quite a daring film for its age (it also received an ‘X’ certificate). On viewing this opening 3 minutes or so one cannot but help but feel a certain melancholy as the Soho is threatened by a drastic facelift.

Once the credits have finished the first character we see (after the road sweeps and cleaners opening the strip clubs) is a girl walking down the street. The girl is Patsy (played by Julia Foster) who has just arrived in London from Bradford and is looking for work. She stops at a seedy strip club called the Peepshow (the club interior and exteriors were actually shot at Shepperton Studios). She is looking for Sammy Lee who she had met at a coastal holiday camp and had told her that he runs a club and could get her a job. He actually works there as the club’s compère. The real manager of the club is crude and vulgar and says if she wants a job to get her clothes off. Sammy (played by singer/actor Anthony Newley) isn’t up yet. He lives in a bedsit in Soho, next door to a Soho walk-up brothel. Sammy then makes his way to a cafe where he is trying to get a win on the bookies. Sammy has run up a gambling debt of £300 that he owes to a local gangster who threatens to do him over unless he pays up within 5 hours. This becomes the driver for the rest of the film as Sammy tries desperately to get the cash together to pay off his debtor. The only time he leaves Soho is when he goes to the East End to try and see if he can borrow the money from his brother (played by future Alf Garnett Warren Mitchell) who runs a greengrocer’s. His brother’s grocery store is off the Petticoat Lane. Interestingly the East End was a traditionally Jewish part of London and Mitchell’s character clearly has a Jewish accent (also meaning of course that Sammy is also Jewish and has reduced the family name of Leeman to Lee).

The Small World of Sammy Lee is a very London-centric film and was not the only one in pre-Swinging London that clearly displays society and life in Britain in the early 1960s with the city being more than mere backdrop. Sparrows Can’t Sing (1963) (also recently re-released by StudioCanal) deals with pregnancy out of wedlock and the social consequences in the East End of London and was a first starring role for Barbara Windsor. By the same principal A Taste of Honey (1961) did the same for Manchester. The film was hardly noted when released in 1963, but can now be seen in a very different light and a light worth going towards. The film was written and directed by Ken Hughes, based off Hughes’ own one set TV play, ‘Sammy’. Hughes had directed The Trials of Oscar Wilde (1960) and would go on to direct Chitty Chitty Bang Bang (1968). The cast too is very strong from singer and actor Newley perfectly cast as the handsome yet still somewhat seedy Sammy. At the time of the film, Newley had had a successful career with a couple of Number 1 hits including ‘Confessin” and ‘Singing the Blues’. Foster too is great as the innocent ingenue in the big city and would appear in a similar, if darker role in Alfie (1966) opposite Michael Caine as the young girl made pregnant by Alfie. Elsewhere there are a whole host of familiar names who appear in cameo roles including Roy Kinnear, a camp Derek Nimmo, ‘Open All Hours’ Lynda Barron as a stripper, Mitchell and Steptoe and Son’s Wilfred Bramble.

The film is quite ahead of its time with lots of nudity and naked breasts and depictions of prostitution, in a film that is almost advertising Soho’s sleazier side. Soho was also famous at the time for being the home of jazz, a musical genre very popular in the early 1960s. Through the opening credits as the camera tracks Soho’s streets Kenny Graham’s mellow jazz score plays and can be heard throughout the film. Meanwhile the cinematography is by Wolfgang Suschitzky. Suschitzky was an Austrian émigré who not only was credited to being the cinematographer on many films but was also a well-known street photographer in London. The film transfer looks incredibly sharp and clear on Blu-ray giving it a very contemporary look, adding great detail to the mise-en scène and the wonderful interiors and exteriors alike. Also included on the disc are talks on the film by Mike Hodges and Julia Foster on her re-collections on making the film.