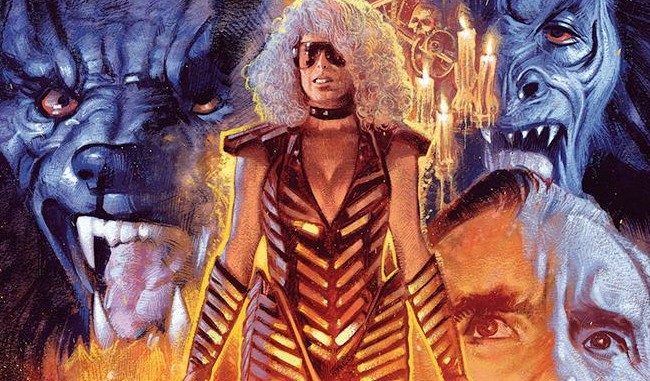 Howling II… Your Sister is a Werewolf Blu-ray Review

Joe Dante’s The Howling and John Landis’s An American Werewolf in London both single handedly re-booted the werewolf franchise in 1981, a horror monster that, like vampires and witches is rooted in mythology and had been a big part of the horror tradition in cinema. The same year the interesting and underrated Wolfen was also released, a crime thriller with a werewolf backstory. Dante became one of the main horror directors of the 1980s. Therefore, there was much anticipation at the thought of a Howling II, even if it wasn’t directed by Dante. Even more so that it was to star Christopher Lee.
Howling II… Your Sister is a Werewolf (it was also briefly released under the sub-title: ‘Stirba – Werewolf Bitch’) was released in 1985. Whereas the original Howling was set in contemporary Los Angeles, its sequel from the opening credits makes clear this film is to have a more gothic setting. The film opens with a funeral with a young man, Ben White burying his sister Karen (who Dee Wallace played in the first film). A stranger is also present, the tall, dark and mysterious Stefan Crosscoe (Chris Lee). Stefan tells Ben that his sister is a werewolf which he naturally angrily refuses to accept. He shows video evidence with Ben still refusing to believe, but when they return to her grave to find that she has transformed and escaped from the grave, leading Stefan to kill her with a silver blade Ben is convinced. Ben and his girlfriend, also present, now believe in werewolves. Together they travel with Stefan over to Transylvania to the lair of the werewolves where they try to track down the queen of the werewolves, Stirber. Stirber (played by shapely siren Sybil Danning) is the slinky and sexy tightly leather clad queen who rules from her layer with other werewolves. Stefan, Ben and Jenny try to track down and stop Stirber and her monsters while they also do battle with the witchy local folklore and curses.
The look of the film differs quite considerably from Dante’s film as it draws and looks less like a gothic Hammer film as some critics have related it to and more like a Jess Franco horror film from the late 60s and early 70s. Spanish director Franco made hundreds of horror films and exploitation films in this period, many of which also starred Lee. Even the credit sequence, as well as the Czech locations have the look of a Franco film. His best film was arguably Count Dracula (1970), also starring Lee and is often cited as the closest adaptation of Bram Stoker’s novel. The other thing this film has in common with many of Franco’s films is the incredibly dreadful and at times inept acting. Lee also seems uncomfortable in the role (he apparently later apologised to Joe Dante for appearing in this piece of trash). The performances by Reb Brown and Annie McEnroe as the other two main characters are dreadful and at times painful to watch. While some of the transformations are okay, the werewolf/monkey suits are simply dreadful. Director Philippe Mora builds little suspense in the film and is clearly limited with what he is able to do, partly due to budget constraints as well as well as problems shooting in communist Czechoslovakia. Mora went on to direct the next sequel, the Antipodean set and even worse The Marsupials: Howling III (1987). Added to the gothic look of the film it uncomfortably sits with its 80s punk soundtrack (played by the band Babel).
Lee, as with many of the bad films he appeared in throughout his career carries himself with dignity and always looks impressive. The film has over the years acquired a cult following, probably due to its gothic retro look and Lee’s appearance. No surprise, therefore, that is released by Arrow Video in the as to be expected superb packaging packed with extras. It has all the gore one would expect from an Arrow release while the extras include a fascinating 30 minute interview with Mora who discusses the difficulty of shooting in Czechoslovakia, Lee’s war record and the amazing generosity of working with Lee. There is also an interview with Sybil Danning who talks about the film as though she’d made a good film, but also her fury at the way the producer left in multiple shots of her breasts being revealed in the closing shots of the film.
Chris Hick