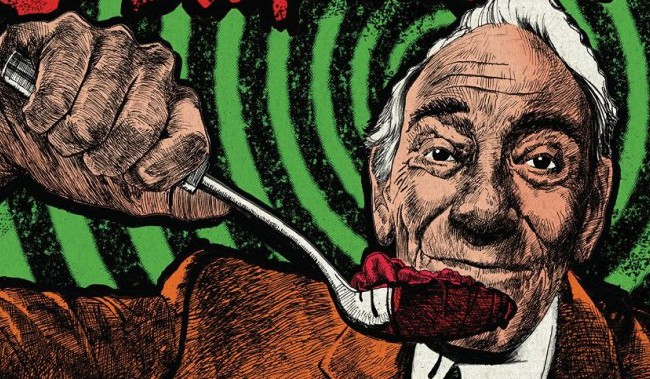 Shock and Gore: The Films of Herschell Gordon-Lewis box-set

In one scene in the cult indie comedy drama Juno (2007), pregnant teen Juno is discussing and bonding with Mark, the middle-class family adopting her unborn baby. Not only are they talking about music way before her time (Iggy Pop and The Runaways against Sonic Youth) but they are also arguing about the differences and who is the better craftsman as a horror director, Dario Argento or Herschell Gordon-Lewis. For Mark, Lewis is “demented with buckets of goo”. As an example Mark shows her a horrific clip from The Wizard of Gore (1970). Juno is sold. Herschell Gordon-Lewis, often given the onerous sub-titles of the original Godfather of Gore, Splatter Meister or Gore Hound made what is often termed as the first splatter movie in 1963, the bizarre, gross and dreadful Blood Feast.

Assembled by fans for fans, Arrow Video have put out a limited box-set of films representing the key works (and majority of works) by the self-styled Godfather of Gore. The collection, presented as a limited edition (2,500 copies) package called ‘The Herschell Gordon-Lewis Feast’ (at 500 copies) or the even more limited edition collection titled ‘Shock and Gore: The Films of Herschell Gordon-Lewis’ which has an additional 92 page book with it on H. G. Lewis written by ‘Nightmare USA’ author Stephen Thrower as well as a 7” vinyl including tracks from Blood Feast. Both editions include 14 of Lewis’s films on 17 discs that include both DVD and some on Blu-ray and each film presented with a 1-2 minute introduction by Lewis himself and a host of extras on each disc as well as bonus discs.

For anyone who has not seen a Herschell Gordon-Lewis film it is always worthwhile warning people what they are in for so as not to raise or lower expectations. H.G. Lewis has made some of the worst and most vile films ever made. There is very little in artistic integrity in any of his films – but he has, as can be hinted at in the lines from Juno, he has his fans. They range from the gross Blood Feast in which a mysterious Egyptian baker kidnaps women in Miami to give their body parts to an idol to The Gore Gore Girls (1972), the last film in the set in which a serial killer (actually a feminist) is murdering and cutting up strippers. The cut up body parts and bright paint like blood are far from reality, but the director did also throw in livers, bovine tongues and real guts making it all the more vomit worthy and even more uncomfortably realistic with latter film with popping eye balls and so on. Some of the films such as How to Make a Doll (1968) about a nerdy girl shy professor who invents a machine to create girl robots (similar to the almost as bad Dr Goldfoot and the Bikini Machine, 1964 that starred Vincent Price) is almost unwatchable as the quality of the 8mm film is almost as poor as an old silent film. Many of the other films have, where possible been brilliantly cleaned up.

Not all these films are horror or splatter films, however. For example other exploitation films include Moonshine Mountain (1964) and This Stuff’ll Kill Ya (1971) which deal with redneck folk in the backwoods, She Devils on Wheels (1968) centres on a violent female motorbike gang and Just for the Hell Of It (1968) is about another violent gang tormenting citizens including children. All these films are both violent and dull in equal measure. Indeed there is little redeemable from many of these films, although there are a couple of films that do stand out from the others (relatively speaking of course). Two Thousand Maniacs! (1964), which was remade in 2001 and starred Robert Englund is tongue-in-cheek from the get-go. It has a party of ‘Yankees’ travelling across the South and end up in the town of Pleasant Valley where a massacre took place during the American Civil War. The townsfolk are in fact ghosts and one by one gruesomely murder the Yankees. Another couple of interesting films includes A Taste of Blood (1967) about a businessman who becomes a beneficiary to his family’s Eastern European legacy and turns into a vampire. There are shades of the future Count Yorga films here (also recently released by Arrow). The other film is the curious Color Me Blood Red (1965) about a painter who only finds the perfect shade of red, in yes you guessed it, blood. So naturally he starts killing to get enough of the colour he needs for his artwork. These three films represent the only three interesting films on the discs. Not good. Interesting though. However for any Lewis fan this a dream set of films and it is right, brave and appropriate for Arrow Video to market these films only to these fans as limited editions.

Coincidentally and amazingly Herschell Gordon Lewis only died a few weeks ago. He died on 26th September this year at the age of 90. Lewis came to films in his mid-30s and started by making skin flicks, or nudie cuties as they became known as, soft core titillating films before turning to drive-in splatter films targeted at the red neck crowd (his films never did or could have received a UK release). Appropriate, therefore, that Arrow Video should release these films as a legacy, not so much of a body of great work but a director and filmmaker that inspired others. Films such as Night of the Living Dead (1968), I Eat Your Skin (1964), Ted V. Mikels’ The Corpse Grinders (1972) (Mikels also died last month), many Italian and European splatter and cannibal films and video nasties that were released in the late 1970s and early 80s were heavily influenced by Lewis’s films. However, if I were to argue about who was the better and more influential filmmaker I would argue Dario Argento over Herschell Gordon Lewis. For as he says in his introduction to Just for the Hell of It, he made the film (and his others) “just for the hell of it”.

To get a better idea of the films and the box-set click on the link below.