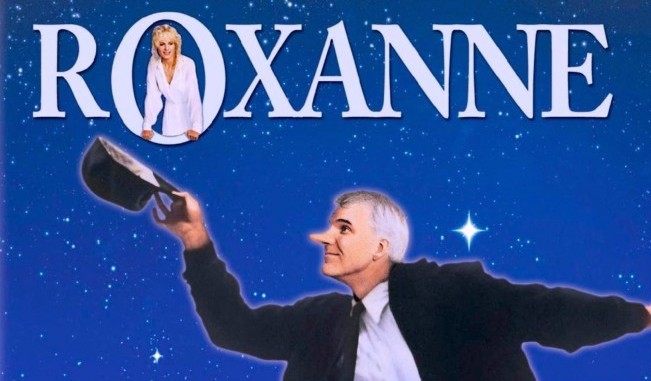 A character actor and an actor from the Method school Luther Adler was reported by a theatre director that when he visited a plastic surgeon and pointed at his own nose, he requested “Doctor, I want you to cut this off and this and this.” “But Mr. Adler” replied the surgeon “if I cut all this off your face will lose character”, to which Adler said “Doctor, wherever you see character, cut it off.” These lines are almost used verbatim in Roxanne, the 1987 comedy starring Steve Martin. The story itself of course is not original. The film is based off Edmond Rostand’s 1897 play, ‘Cyrano de Bergerac’. The real-life Cyrano de Bergerac was a real-life duelist and playwright. The story is a familiar one, cursed with a large and extended proboscis, Cyrano falls in love with the beautiful Roxanne and despite his fine use of words and his poetic disposition he is shy to let his feelings known to Roxanne. When another more handsome man also enters the play, the shallow Christian who is attracted to Roxanne is dumb with his words and uses the words and letters of Cyrano to seduce her having the desired effect. Of course in the end Cyrano is uncovered as the real seducer.

Made in 1987, Roxanne sits on the pivot between what many have termed as Steve Martin’s earlier funny films and his later safe sentimental comedies. Martin, who originally came out of such shows as the ‘Sonny and Cher Show’ and became famous for his two early distinctively surreal comedies, The Jerk (1979) and The Man With Two Brains (1983) before going on to make a number of key comedies in the 1980s and most importantly wrote many of the scripts himself (including Roxanne). By the 1990s his comedies became safe, less challenging and sentimental. The likes of Parenthood (1989) and the Father of the Bride films, as popular as they were at the box-office did not resonate in the same way. Roxanne has a safe surface look to it with its nice setting of Nelson, British Columbia, Canada. C.D. ‘Charlie’ Bales (Martin) is the popular fire chief in this small town. People see Charlie as a shoulder to cry on and turn to him for advice. His life is turned down when the beautiful astronomy graduate, Roxanne Kowalski (Darryl Hannah) moves to the town. Everyone seems to be able to see it, except of course Roxanne herself. A new handsome young fireman called Chris (Rick Rossovich) also starts to work with Charlie and is also
attracted to Roxanne. He is shy, awkward and shallow. Realising that Charlie is good with words he gets him to seduce Roxanne for him which he duly does to be near her, even putting a wire on him and feeds him lines with some funny if predictable consequences. After a few farcical situations naturally Charlie wins Roxanne over.
It is undoubtedly a different kind of romcom but does generally tick all the boxes with slapstick and farce within the more conventional romcom elements. It does suffer from being only sporadically funny and despite a good performance from the two leads it does have a leaden performance from Rossovich as Chris. It is a charming and very likable comedy that does sag in places. The best moment in the film is the scene in the bar in which a loud mouth in the bar calls out at Charlie as “big nose”. Charlie asks the man if that is the best he can come up with. He tells him that he can give 20 better insults than simply “big nose”. This gives Martin room for some classic and even cliched gags but is delivered in Martin’s own style to the cheer of his fellow drinkers – before eventually lamping him one. There is also something glowing and Capraesque about the film with it’s genuine small town folk and the power of the underdog. The film does look dated today though, but with the sharp Blu-ray imagery on the Eureka Classics release the film does get an opportunity for a new look to it. Bare bones extras.
Chris Hick
https://www.youtube.com/watch?v=Y3bwHtPZfps
Share
Tweet
Pin
0 Shares