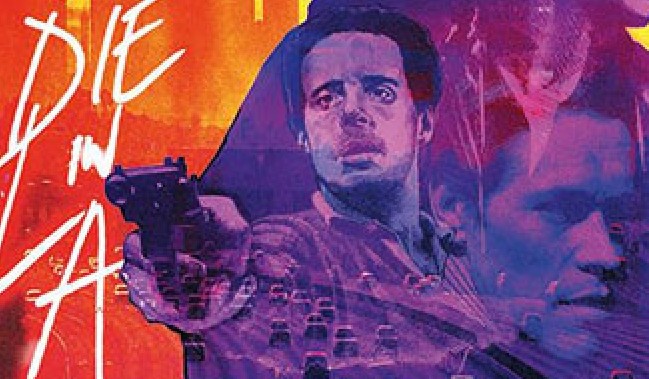 To Live and Die in LA Blu-ray Review

The 1980s produced some cracking crime action movies and this is one of them, despite having largely passed the world by. Maybe it was its largely unknown cast (although of course villain Willem Dafoe would become a big star). The film was directed by William Friedkin who brings some style to his than in other films, despite many comparisons to his early film, The French Connection (1971). As this former film was set on the streets of a wintry New York, so To Live and Die in LA (1985) makes the most of the urban, hot and sultry sunets of the LA skyline. Again to draw comparisons with The French Connection the plot of the film centres on two narcotics police officers and their obsessive hunt for a French heroin smuggling ring. In To Live and Die in LA focuses on United States Secret Service Agents. Previous to this film it was unusual to focus on the Secret Service outside of New York or Washington DC with the ones presented here are given a very different appearance and manner that can be seen in such films as In the Line of Fire (1993).

The main character is Richard Chance (William L. Petersen), himself something of a daredevil who likes to bungee jump in his spare time. Together with his partner Hart, Chance is on the trail of a large scale print to order counterfeiter. Another associate, Vukovich (John Pankow) messes up while they are on the trail of their chief suspect, an artist called Eric Masters (a young Willem Dafoe). Alone, Hart discovers Masters print workshop in the desert and having recently ruthlessly killed a former client, he murders Hart. Hart’s partner, Chance is devastated by the loss and begins to use dangerous and unethical means to get Masters. This includes extracting information from his girlfriend or more accurately fuck-buddy, Ruth (Darlanne Flugel) who he threatens to have in breach of her parole if she doesn’t feed him information. After Hart’s murder Chance partners with Vukovich and over time he transforms more to be like Chance as he works with him. The pair go undercover and worm their way in with Masters and propose a business deal with him. The pair soon find themselves the target of a set-up when they take a man Ruth had fed was smuggling diamonds. When they take the man and his handcuffed briefcase to an LA underpass they find themselves targeted and in a mad hair raising car chase, causing a pile-up which they narrowly escape.  Masters proves to be a tricky customer to entrap and with a trail of corpses in his wake.

Violent it might be, once again Friedkin presenting us with characters that flirt with both sides of the law, like Popeye Doyle, Chance is obsessed by getting his man, but here is driven more by revenge than Doyle was. Interesting too is the understanding between good/bad who live among the same milieu. However, Dafoe’s Masters is sophisticated, kinky and coldly sadistic, whereas Chance is passionate, impulsive and reckless. This was an early film for Dafoe who had only made a couple of films before this one. A few years after this film he would be one of the sadistic and twisted killers in David Lynch’s Wild at Heart (1990) and there are certainly shades of that character here, whereas Petersen would go on to star in the first Hannibal Lecter film, Manhunt (1986). On the extras on the disc, nearly all the actors interviewed would talk about how Friedkin all gave them their early break and his generosity of spirit as a director. They also talked about his spontaneity as a director; how he would often get the short he needed in one take. Another problem that arose making the film was, of course, the very dubious printing of money that led to arrests and had to be done on the sly. An aspect that stands out in the film is the synth soundtrack by British recording artistes Wang Chung who would have a big heat with the song ‘Dance Hall Days’ (which can be heard in a strip club).

The disc, as ever with Arrow Video, is packed with extras, with interviews with the cast, main and even minor actors as well as a fascinating making of documentary. The release of this disc perfectly complements another recent release by Arrow, 52 Pick-Up (1986), but what stands out particularly from this release is how beautiful it looks on Blu-ray. The cinematography was done by Robert Muller, who had previously been a regular cinematographer on Wim Wenders films and it is clear in the camerawork used that Friedkin must have seen The American Friend (1977) with its use of colour tones, dusk and sunrise with silhouetted skylines and, in this case the tall palm trees against the sunsets and sunrises.