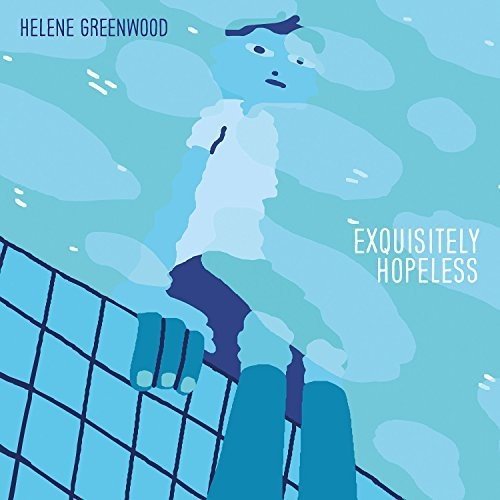 The second album from London based songwriter Helene Greenwood marks something of a change of style. The slow and elegant songs of Exquisitely Hopeless exist on a dreamy and atmospheric musical pallet with real depth, very different from the folk – pop feel of 2013’s Collectible You. A more expansive backing though, created using a vast array of instruments, doesn’t detract from Greenwood’s light and almost ethereal vocals, which float over the music beautifully.

Exquisitely Hopeless is a concept album, following a woman living a confined domestic life who imagines what the world outside her own horizons could be like. The contrast between reality and imagination, confinement and freedom, gives the theme for eleven bold and sweeping tracks, perhaps best described as dream – pop. In places the keyboards create an almost ambient sound, at others the tome is more moody and led by some lovely bass work.

There are several good tracks on the album, although none truly stands out. Perhaps the nature of the story is best reflected by an even set of songs – and there is enough variety to avoid things ever settling into a rut.

The opening track, and recent single, This Is The News Today gives a strong introduction to the album’s themes. Dream Horses has a slow tempo and a dark undertone, speaking almost of nightmares. The music rises, Greenwood’s voice moving from a whisper to soar high before fading once more. Flat Roof House is an intriguing song, with time marked by a ticking underlying lovely organ work and stronger vocals cutting though the mix.

Madam Marina has a discordant feel that gives it a rather nice supernatural edge. The one cover on the album is a slowed down version of I Say A Little Prayer, the oft recorded Bacharach and David song originally written for Dionne Warwick. Greenwood’s version fits well into this album, her wide vocal range used to good effect. The dramatic closer Chorale sees the clear vocal take the lead, ending the album with a stylish track that builds to a big finish.

Exquisitely Hopeless shows Helene Greenwood to be a strong songwriter with some nice lyrical flourishes and also showcases her fine vocal work. Concept albums may be a rare breed in these days of individual downloads, but this one works well.