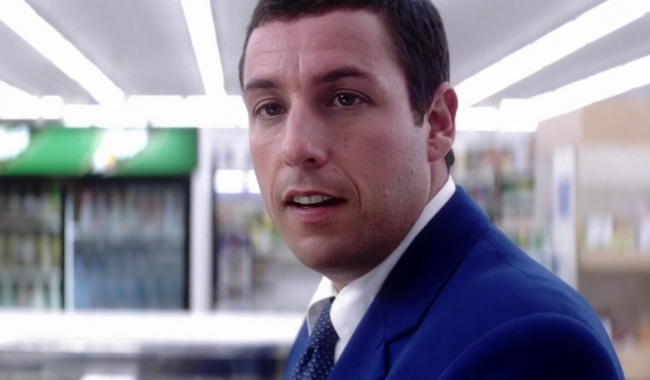 Adam Sandler’s films are usually fairly formula in their style – crude, crass and occasionally funny comedies with a sentimental outcome. While Paul Thomas Anderson’s Punch-Drunk Love (2002) might have a sentimental ending, it is a very different type of comedy to Sandler’s usual films and is very much a Anderson film and not a Sandler one. It also gave him the opportunity for Sandler to add layers of complexity to his character and proves to be worthy for a P.T. Anderson film.

The opening of the film sets the tone. Barry Egan (Sandler) owns and runs a business from a warehouse in the San Fernando Valley that sells unusual toilet accessories (probably) among other things. It is a business he admits later that he works hard at. However, at present Barry seems to be suffering some ennui in that he seems bored. He is hectored by his 7 sisters who, although love him also suppress him. He has also found a scheme whereby if he collects Healthy Choices chocolate desserts he can earn enough air miles for a lifetime. Barry Egan also seems to be somewhere on the spectrum and is unsure how to tackle his emotions and deal with his sisters. But on this morning Barry is curious, he has started the day early and heads to the roadside with his coffee. There he witnesses a car crash and tumble, followed shortly after by a cab pulling up and dumping a harmonium at the roadside. Barry takes the harmonium back to his office. This opening causes the viewer, even after viewing many times to jump in shock at this sudden violent scene. In fact throughout the film the sudden appearance of vehicles cause moments of shock and violence – every time. Also this morning a young woman called Lena (Emily Watson) drops her car off to be repaired but the repair garage hasn’t opened yet so leaves him with the keys. It turns out that Lena is a co-worker of one of his sister’s who are all calling him to ensure that he comes to a birthday party so that they can set him up with her. He sees the ruse and tries to deflect it and avoid being set-up. Lena eventually does approach him at work and builds up the courage to tell him that she likes him and invites him to Hawaii where she will be leaving for in a couple of days. Meanwhile, Barry has also got himself into a bit of bother after calling a live chat sex line. Calling, after giving all his personal details including credit card and social security he is hassled by a girl called Georgia who calls him constantly demanding money or else. The sex line gang (run from a carpet shop in Utah) make good on their promise sending thugs to beat Barry up. He sees this as his opportunity to fly to Hawaii to cement his relationship with Lena (in the throws of passion, Barry tells her: “I’m looking at your face and I just want to smash it. I just wanna smash fuckin’ smash it with a sledgehammer and squeeze it. You’re so pretty.” She replies: “I just want to chew your face, and I want to scoop out your eyes and I want to eat them.”) Still he must go back and resolve the situation with the phone sex company and when the threats by the gang extends to Lena he suddenly travels to Utah with a phone receiver still in his hand and confronts the aggressive Dean Trumbell (brilliantly played by the late Philip Seymour Hoffman) who runs the site and says to him “I have so much strength in me you have no idea. I have a love in my life. It makes me stronger than anything you can imagine!”

Anderson’s films can be described as indie, but indie in the sense that he seems to have control over his vision, with some big names he is able to attract for his films. Only 32-years-old when he made this film, this was Anderson’s fourth feature, having already both critical and commercial successes before with the more low key Hard Eight (1996) about an ageing down on his luck gambler. This was followed by the hugely successful Boogie Nights (1997) about the porn industry in LA in the 1970s, and his previous film to Punch-Drunk Love, the quirky Magnolia (1999) with a stand out performance by Tom Cruise. Anderson has his own particular vision and this film threatens to explode into chaos including the frenetic and unnerving score by Jon Brion, while Robert Elswit’s cinematography is a wonderful candy coloured blast that takes in light trails and has Sandler’s electric blue suit stand out against the tones of drab interiors. Anderson made regular use of Hoffman who has a great character role in the film while Sandler has perhaps only one since stepped away from the mainstream into a successful quirkier kind of comedy since Funny People (2009).

As is usual with Criterion releases, the disc is laced with extras but the best extra is the real news story of entrepreneur David Philips who figured out that if he bought promotional Healthy Choices chocolate dessert pots he could fly on air miles for years. Priceless. The film looks outstanding on Blu-ray.