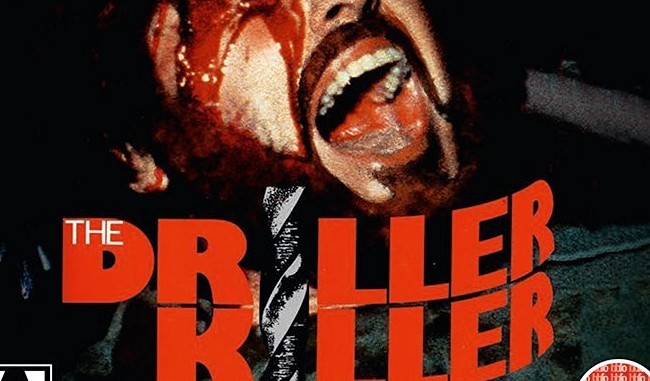 THIS FILM SHOULD BE PLAYED LOUD. So says the opening title to The Driller Killer, Abel Ferrara’s notorious debut feature from 1979. This film is more than just a Video Nasty, the moniker it gained in advance of its British release and its subsequent banning in this country (a fuss it did not receive in the USA). It is also a punk film, with Ferrara himself in the lead as Reno Miller (acting under the pseudonym of Jimmy Laine), a struggling Chelsea artist. This is the punk art world of The Ramones, the post Andy Warhol period when all the jacked up artists, waifs and strays gathered alongside with transvestites, junkies and musicians like Lou Reed that gravitated in this world. The film also has a grimy lo-fi feel to it leaving you a little like you need a shower after it. And it’s supposed to be like that. But it was these elements and most particularly the jacket cover that led to it being banned depicting  a man getting his head drilled.

The film takes a while to, well let’s say get into the horror. The start of the film focuses on the everday and struggles of artist Reno Miller who lives with two other girls who all share each other. At the beginning of the film we see Reno and his girlfriend, Carol in a church when Reno becomes freaked out by an old man. We then see the rough and ready apartment where Reno is working on an epic sized painting of a buffalo that he hopes will give him recognition. Meanwhile, he is trying to borrow money in order to pay the bills and launches the occasional tirade at Carol while working. Downstairs musicians move into an empty apartment, a New Wave band that spends all day and night rehearsing. At first Reno is not bothered by the all night music but it eventually begins to grate on him. He starts having visions of being covered in blood and decides to go for a walk on the dirty New York streets. When a bum gives Reno a skinned rabbit he starts becoming distant and begins to spend his nights on the streets before he randomly starts to murder the homeless with a power drill.

This was Abel Ferrara’s first feature film. He came to filmmaking having made a couple of hardcore porn films. Ferrara claimed that the plot of a struggling artist with ‘anger issues’ came to him through his friend (who plays the guitarist singer of the band) and said that apart from the killings this was a biography of him. The New York scenes are shot with 1970s gritty realism, with an image of New York that has arguably long since gone now that the city has been cleaned up. The lives of those in the city, almost without exception are people on the peripheries of society and this is why Reno’s murder spree takes place as he fears ending up as a bum and seems to want to wipe them out literally and metaphorically. Unlike the likes of Wes Craven who made the nasty The Last House on the Left in 1972 before etching out a career in horror and fantasy, Ferrara mostly stayed away from further fantasy horror and gore and instead focussed on messed up violence when he would make Ms. 45 (1981), The King of New York (1990), Bad Lieutenant (1992), but did venture twice into horror with Body Snatchers (1993) and the modern sort of vampire tale The Addiction (1995), social misfits always at the heart of his films, something that Ferrara, having, like Martin Scorsese grown up on the mean streets of the Bronx, New York.

The extras on the disc do focus mostly on Ferrara rather than the film itself and there is little context to the film being banned in the UK. Never the less the extras include an interview with the director, titled ‘Laine and Abel’ in which he discusses how his career up to that point led him to make The Driller Killer. Another documentary by Alexandra Heller-Nicholas covers the entire career of the director while another feature length documentary looks at the locations of the film compared to how they look today. This is the usual excellent package by Arrow Video and goes with that controversial image for its cover. Also available in steelbook limited edition.