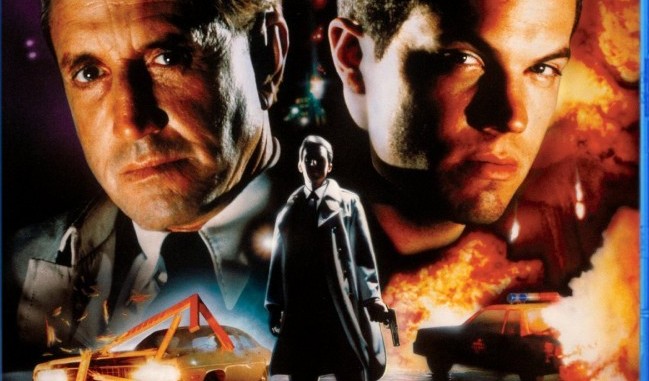 Following on from Arrow Video’s October release of  John Frankenheimer’s neo-noir film 52 Pick-Up (1986), they have also released another film starring Roy Scheider, an actor best known as Chief Brody in Jaws (1975). Made a couple of years after 52 Pick-Up Scheider also starred in Arrow’s latest release, Cohen and Tate, an interesting release that itself resembles an old noir thriller.

The film opens on the open plains of Texas in an old small shack farmhouse. There, a boy is with his parents and some FBI agents under protective custody as the boy is about to provide evidence to convict a gangster. The family and the agents are clearly nervous of people finding them. This early establishing scene maintains tension of impending doom including among the agents. Suddenly one of them leaves in his car when another car arrives. The boy, aged 9, runs out of the house against his parent’s wishes to chase after the family dog. Two men get out of a car, kill the remaining FBI men and shoot the boy’s father. One of the two hitmen makes a call and tells the person on the other end that the job is done – almost. He then turn his gun to the boy’s mother and shoots her. Once they have captured the boy they take him off in the car and head off on the road for the almost 400 mile journey to Houston where they are to deliver the boy to their client. The boy establishes that the two men have killed his parents and is now concerned he will also be killed. One of the men is called Cohen (Roy Scheider), who as a character is the consummate professional hitman who likes to see the job through for which he has been paid. His partner is the younger Tate (Adam Baldwin), wild, almost uncontrollable and clearly a big kid with very little in the way of a moral compass as he takes enjoyment in killing and even roadkill. Sitting in the backseat, even at his young age he senses the antagonism between Cohen and Tate and begins to play one off against the other, antagonising the violent Tate and trying to set Cohen against his mis-matched partner. However, when driving through the night and they come across Highway Patrols, 9-year-old Travis gets more examples of how violent and ruthless Cohen and Tate are.

As violent as it is, Cohen and Tate does have restraint with some of the violence taking place off camera, while the film is another example of how underrated an actor Roy Scheider was. He acts with his eyes, minimal dialogue or movement. His character also wears a hearing aid which gives him an extra element of vulnerability. On a documentary extra on the disc, the films writer and director, Eric Red compares Scheider’s character and performance to something more like a samurai warrior. Scheider does not disappoint and on this point his ending is samurai like. By contrast, Baldwin’s Tate is over the top and a rather toolish and violent individual. It is an interesting film that is not often seen, even forgotten and does have some of the elements of an old fashioned thriller from the 1940s/1950s and manages to be on the right said of being an exploitation films. Extras on the disc include a 30 minute documentary on the film including interviews with the director, Eric Red, the now grown-up Harley Cross who played young Travis, the cinematographer and the film’s editor. Typical of Arrow Video there are also a good level of extras including some of the more violent scenes that were rightly deleted.