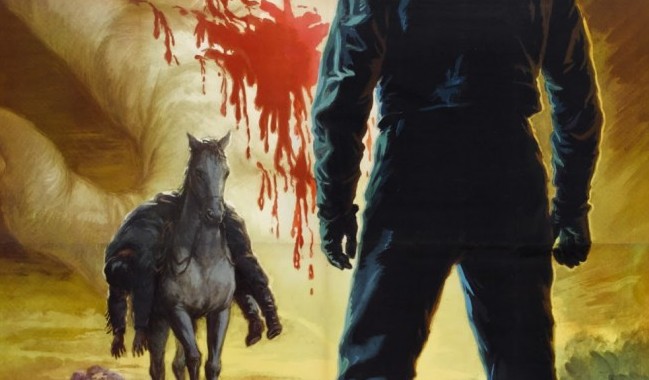 The Man From Laramie Blu-ray Review

Anthony Mann, alongside John Ford and Henry Hathaway is one of the key directors of westerns in the 1950s. Since the end of the Second World War westerns became more than escapists entertainment. The genre began to take on new life and for some intellectuals they came to be termed psychological westerns. Anthony Mann made several good westerns in the 1950s with some five of the best all starring James Stewart: Winchester ’73 (1950), Bend of the River (1952), The Naked Spur, The Far Country (both 1954) and this one, the latest release from Eureka!, The Man From Laramie (1955), arguably the best of all.

Filmed and set in New Mexico, the film opens with a drifter, Will Lockhart (Stewart) arriving in the small dirtwater town of Coronado. He is in search of those who sold repeater rifles (Winchesters) to Apaches which ended up killing his younger brother, an officer in the cavalry at Fort Laramie. Deciding to stick around he is greeted with hostility by the Waggoner family, big land owners in the area. While collecting salt from salt flats with some men he has employed he soon runs into the young Dave Waggoman who tortures and humiliates Lockhart, shoots his mules and burns his wagons. Angry Lockhart returns to town beat the young Waggoman and old man Waggoman’s trusted forehand, Vic Hansbro (Arthur Kennedy). Old man Alec Waggoman berates his son and compensates Lockhart for his troubles. He never the less asks Lockhart to leave town. He refuses and threatens the wrath of the Waggomans. Lockhart begins working on the farm of a neighbour on the Half Moon Ranch, an older lady, former fiancee of the elder Waggoman and bitter rival and refuses to go until he has avenged the death of his brother. This threatens the Waggoman family and everything is being set up for an eventual showdown.

Typical of the psychological western, and particularly a Mann/Stewart western, revenge is the central driver of the plot and as is typical of Stewart’s performance in such films, there is an intense performance in which behind his blue eyes and a civilised sense of decency he is seeking revenge. Mann,  with co-script writers Philip Yordan and Frank Burt added this frisson of psychological tension, with some almost Shakesperean characters to the script. There are Freudian elements here such as the Oedipal elements (the relationship between the two younger men with old man Waggoman), absent mothers or Kennedy’s Death Drive (he saves Lockhart from Dave Waggoman early on but faces him off at the end). Elsewhere there is even a Freudian dream telling in which Crisp’s character more than once relates a dream in which he dreams of a man who comes to him to will kill his son. Crisp believes that it’s Stewart’s character who is that man. Even Stewart’s character name suggests some macho personality, typical of a western of the time – Will (Nietzschean Will?) and Lockhart (or is it Locked Heart?).

The opening credits are bright, colourful with typical western typeface credits sung to ‘The Man From Laramie’ theme song. This adds an added romance to the film and had familiar since High Noon (1951) to have a song romanticising the hero at the start of the film. The song used in the film was made into two big hits in the mid-1950s, more in Britain than America with versions by (future Radio 2 DJ) Jimmy Young and a wonderful Al Martino. During this opening credit sequence we see in proper western tradition a stranger riding the hard landscapes of New Mexico, silhouetted of course against the skyline. Another aspect making this film stand out and adding it to the more adult themed western becoming popular in the 1950s was the violence. The Man From Laramie took this to a new level with the violence being cleverly orchestrated and managed. Aside from fight sequences and shoot-outs there are the famous scenes of Stewart’s character being dragged through a fire by a lasso and the most notorious scene of all when Dave and his men ambush  Lockhart. Dave had been wounded in the hand from one of Lockhart’s bullets. His revenge is to have his men hold Lockhart down and shoot him through the hand. This is in many senses one of the more sadistic westerns of the decade. An illustration of this scene is on the front of the disc.

A notable extra on the disc is a 20 talk on the film by Kim Newman (usually more associated with horror films). There is some grain on the film but the sharp images while the 4K transfer really brings out the colours well. The cover design on the disc is also arresting, the image taken from the French theatrical release of the film.