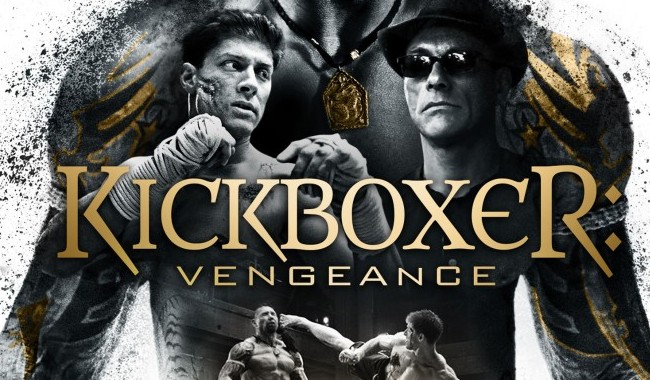 The original Kickboxer, made in 1989 is still something of a cult film, maybe not to the degree that Bruce Lee’s martial-arts films were in the 1970s but never the less for testosterone fuelled teenagers, JCVD kicking out did it for them. No surprise then that a remake should be in the offing to join the ranks of cult films from the late 70s and 80s getting the remake treatment. An even bigger coup was to have the muscles from Brussels himself, Jean-Claude Van Damme play a significant part in the film. What is also apparent, at 56-years-old he still has the physique to pull it off. Kickboxer: Vengeance has been made to, excuse the pun, kick off the sequels again, with a second, Kickboxer: Retaliation due for release next year and another due to begin shooting next year.

The film is set in the exotic location of Thailand and opens with Kurt Sloane (Alain Moussi) arriving at a temple and the training ground of the mysterious Tong Po. He is met with suspicion by the Russian doorman and is eventually challenged to a fight by him, which Sloane wins. Another, taller man steps in but Sloane is roundly beaten. Sloane is invited to stay and train. During the night Sloan skulks around the temple and with a pistol in his hand he goes to kill Tong Po (David Bautista) in his bed. However, Po catches him out with the Master realising who this Kurt Sloane is and informs him that his brother was a real warrior and that he is a coward. A flashback shows us that Sloane’s brother is his older brother, Eric, a celebrated fighter and champion. Tong Po had fought with Eric Sloane, despite his younger brother’s protestations at an illegal fight and is killed by Tong Po. The police arrive at the scene but there are no arrests. Kurt makes his way to make to a Master Durand (Van Damme) to train him to defeat Po. In a rather clichéd but nicely shot montage sequence we see Kurt undergo some gruelling training in the jungle but their training is obstructed by the police, led by a police officer called Liu who has started dating Kurt as she believes that Kurt is seeking revenge and in so doing is putting his own life in danger.

Kickboxer: Vengeance is rather cliché ridden revenge action film, but is so beautifully shot that it can almost be forgiven. It is though another example of a pointless remake, it really is for the visuals on a nice big telly or screen that this film should be seen. Naturally the choreographed fight sequences are outstanding if you like that sort of thing and Bautista who plays the villainous Tong Po certainly has presence and oozes villainy as the WWE fighter who had previously appeared in Guardians of the Galaxy (2014). Moussi as Kurt Sloane is quite forgettable (interesting to note that it is Bautista on the disc cover and not Moussi) while his relationship with Liu, the police lieutenant is laughable. She is merely there as a love interest and to add femininity as an antidote to all the macho posturing the film exudes, while her clear western good looks only serves to highlight this. The locations, fight sequences and photography are not enough. The film is what it is and should still appeal to a younger generation with the same target appeal. Extras on the disc include various making of documentaries and cast and crew interviews.