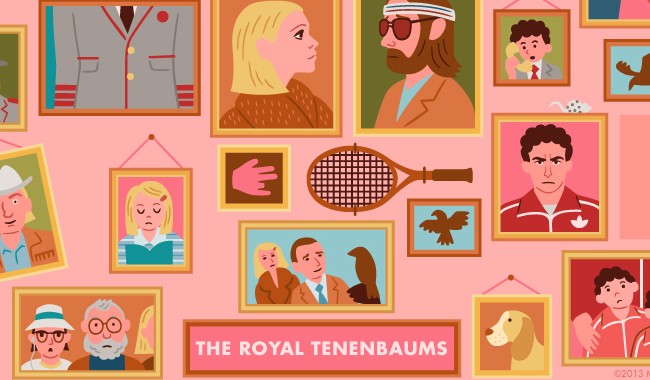 Wes Anderson has rarely put a foot wrong since his first film, Bottle Rocket in 1995. Since Anderson has developed his own style and focuses, dream like on dysfunctional people and gives them an almost cartoony caricature. The Royal Tenenbaums (2001) is about familial dysfunction in which human failure is at the heart of Wes Anderson’s world.

The film opens, as is typical with Anderson films with a narrator (this time Alec Baldwin) telling the story of the Tenenbaums: a family of what the matriarch of the family, Etheline Tenenbaum (Anjelica Huston) calls a self-styled family of geniuses. When they were young their selfish father, Royal Tenenbaum (Gene Hackman) left them, leaving architect Ethel to raise them up on her own becoming successful in whatever they pursued, geniuses. Never the less each of them has a major dysfunction. Chas (Ben Stiller) was a successful child businessman who is anally retentive but has become bitter since the death of his wife in a plane crash, micro-managing his twin sons, the depressive Margo (Gwyneth Paltrow) was adopted and a literary genius, also having run away with brother Ritchie (Luke Wilson) whom she has an unhealthy relationship with. He grew up to be a successful tennis pro until he had a nervous breakdown on the tennis court. He was also the favourite son of Royal. His best friend is Eli Cash (Owen Wilson). Eli is a historian and has written a book about General Custer and also likes Margo. By the time they were in their 20s, they had all burned out. All this prologue is played to an easy listening version of The Beatles’ ‘Hey Jude’. For years the Tenenbaums had no contact with Royal who had left home. One day he comes back to Ethel and declares that he has terminal cancer. He doesn’t, but wants to worm his way back into the family home to try and break up Ethel’s relationship with one Harry Sherman (Danny Glover), the first person Ethel has been serious about and wants to marry.

The aesthetic mise-en-scène of any Wes Anderson is beautiful to look at. The soundtrack too is resplendent with a wall to wall sound of great songs and music from start to end. Through Baldwin’s opening narration heard in the background is an easy listening version of The Beatles’ ‘Hey Jude’ by the Mutato Muzika Orchestra. Elsewhere there are songs by Nico, Nick Drake, Simon and Garfunkel and The Rolling Stones, again the use of music is well used by Anderson in all of his films. Meanwhile, each frame of a Wes Anderson film looks considered and composed like an eccentric painting. This probably reached its apotheosis in the more recent The Grand Budapest Hotel (2014). None of this, nor the myriad of stars in this film are there to distract the viewer from any other inadequacy. The dialogue and plot are also full of intelligence and wit (written by Anderson and Owen Wilson, who is also a close friend of Anderson’s and had known him since college), while the characters are well rounded and given plenty to do by Anderson and Wilson. Maybe there is little in the way of plot in the film, but that is part of the point. As ever in his films, the devil is in the detail such as the child-like pictures on the wall, the mice running around the house who are a blend of dalmatian and mouse as invented by Chas or the beloved hog’s head of Royal Tenenbaum.

Newly released on Blu-ray the film is, as with most Criterion Collection releases the disc is full of extras including on-set interviews with the cast, a picture gallery of the child-like drawings by Albert Maysles among other imagery of the artwork and scrapbooks. However, despite the amount of material included on the disc it is negligible how much this adds to the overall package.