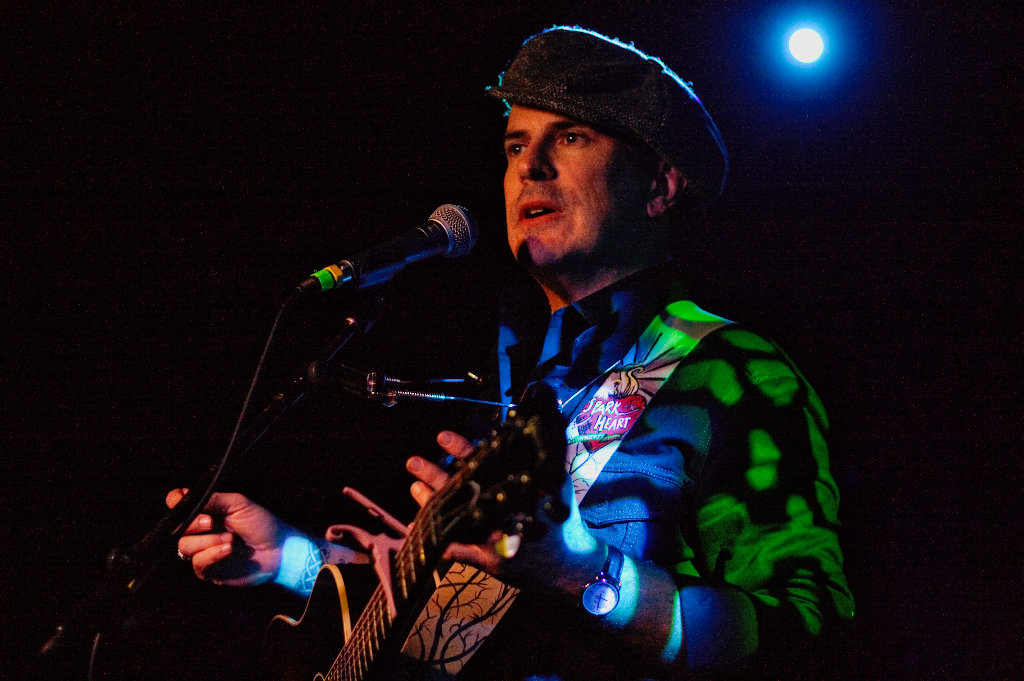 American singer songwriter Michael McDermott delivered a superb solo set to a small but very appreciative crowd in Glasgow last night. The latest stop on a rare UK tour saw Chicago native McDermott play several songs from his most recent album Willow Springs as well as many tracks from his back catalogue, displaying his full range of talents in an excellent near two hour long performance.

Support act Dave Hughes played a short set of his acoustic songs to open the evening. The local songwriter has a good guitar sound and his emotional songs were well received. He also played a good cover of Loudon Wainwright III’s White Winos, introduced as a personal favourite.

Michael McDermott strolled confidently onto the small, dimly lit stage in the basement of Glasgow’s Hug & Pint with his acoustic guitar and began to play. Opening with These Last Few Days, Getaway Car and Folksinger, all from the recent Willow Springs album, his deep voice was pitch perfect from the off. The folky feel of the songs and his poetic lyrics were well matched, setting a high standard from the off.

McDermott then switched to the keyboards for a trio of slower songs about death. Shadow In The Window, written for his father, was tender and heartfelt, mixing love and regret in equal measures. Butterfly was next, the quite beautifully told tale of a former girlfriend who succumbed to a drug overdose. Michael McDermott is always very open about his past, which includes alcohol and drug addiction as well as a spell in prison, and the almost painful honesty of his songs gives them tremendous power. He doesn’t invent characters in his writing; this man has lived the stories he tells. The downbeat trio of tracks ended with Carry Your Cross, another emotional song, this one dedicated to a former girlfriend taken by cancer.

Switching back to guitar, the pace picked up once more. McDermott skilfully mixed songs and stories, telling of a stalker from Mississippi and several alcohol fuelled adventures with great humour. Bars, a track from side project The Westies and older song 20 Miles South Of Nowhere were real highlights, before the set concluded with his new album’s title track Willow Springs and A Wall I Must Climb, his 1991 debut single. Written 25 years apart, these two songs tell a great deal about the struggles of the man behind them.

The short encore consisted of two requests from the many shouted out. Say Hey Charlie Boy on guitar and a deeply emotional version of redemption song Wounded on keyboards were chosen, the latter introduced as a reminder that even the deepest depression can be overcome. It was a moving and powerful end to an excellent night of music.

Michael McDermott is a criminally under-recognised songwriter and performer. His first person narratives are heartfelt and powerful, often telling of life’s darker side with real poetic skill, while not pulling any punches at all. But he has come through the darkness and is now clean and sober, living a contented family life and producing the best work of his career. McDermott deserves to be playing to much bigger audiences.