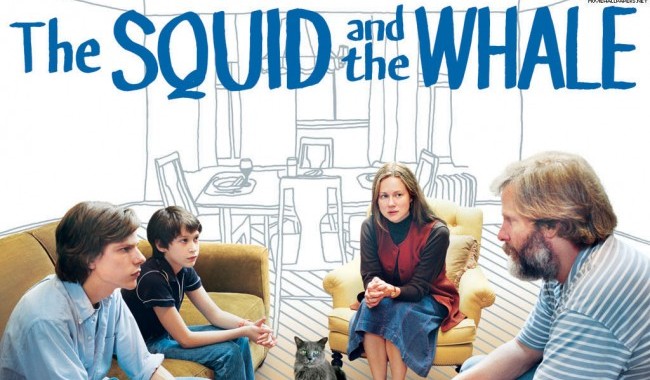 As well as releasing Wes Anderson’s The Royal Tenenbaums  also released by the Criterion Collection is Noah Baumbach’s The Squid and the Whale (2005). There is some consistency to the story of both directors who’s friendship and careers have crossed on many occasions. Baumbach had worked on The Squid and the Whale for some years. He was aware that this was a project too close to him, that if it went wrong it could go wrong spectacularly. He and Anderson worked on this film before halting the writing. In the meantime Anderson went on to direct The Royal Tenenabaums (2001) and often included Baumbach in the project. Following this Baumbach co-wrote the script for Wes Anderson’s The Life Aquatic with Steve Zissou (2004) before returning to and completing The Squid and the Whale in 2005 with Anderson as producer. The reason for Noah Baumbach being so close to the project? The answer is that despite Baumbach’s protestations to the contrary the story and the setting closely resembled his own growing up in mid-1980s Brooklyn with the devastating effect on the family and teen-psyche that the break between his parents had on him. However, he was to make the film with a great deal of humour as well as tragedy and gets the balance right.

The film opens in 1986 and starts with an indoor tennis match between the mother of the story, Joan Berkman (Laura Linney) who is playing alongside 12-year-old tennis prodigy son Frank (played by Owen Kline) against the father, Bernard Berkman (Jeff Daniels), a writer who has not had a book published for some years and is  working as a literature professor. He is playing and partnering their eldest son, 17-year-old Walt (Jesse Eisenberg). The tennis match initially looks like a place of family unity engaged in an activity together but tensions soon arise when Joan accuses Bernard of deliberately firing bodyshots at her. She glares back at him with the result of the couple walking off the court feuding. Tennis matches like this can be used for the ping-pong back and forth of relationships. Woody Allen’s Annie Hall (1977) also opened with a similar tennis match in which Allen is partnered up by his friend in a doubles match with Diane Keaton in a sort of blind date, beginning Alvie’s relationship with Annie Hall that kicks off the film. The Squid and the Whale is the opposite of this though as the couple here are clearly struggling to keep the family unit together. Much of the milieu this family surrounds itself with are like the WASP families of a Woody Allen film but there are some departures. The break of the marriage is soon through the eyes of the children rather than the grown-ups. Each character is flawed (as in an Allen film) but the confusion and crisis break-ups create is very much seen through the eyes of the children. When the couple sit down with the boys and explain that they are breaking up and that their father is going to move into an apartment a few subway stops away in a poorer neighborhood and that they have decided to have shared custody, 12-year-old Frank breaks down in tears while Walt concerns himself with how they are going to share the cat. The adults try to present the case as though this is amicably agreed but their personalities dictate otherwise. Joan can appear cold and logical whereas Bernard is an intellectual man-child and very selfish. The children too are not portrayed as innocents and the break-up bring their flaws and growing pains to the surface: Frank discovers masturbating and begins wiping his semen onto school library books (yes, I actually wrote that and is in the film). Walt, meanwhile, begins dating and takes misguided advice from his father and also, like Bernard becomes an intellectual snob. There are clean lines of division between the allegiance of the boys. Walt supports and looks up to his father, even becoming hostile to Joan, while Frank believing what his father says that tennis players are philistines who abhor literature and the arts gravitates to the loving comfort of his mother (who still calls him “pickle”).

Like Allen and Ingmar Bergman, family struggles inform Noah Baumbach’s best films. Margot at the Wedding (2007) sees the awkward tensions develop when Margot (Nicole Kidman) arrives for the wedding of her sister to a man she doesn’t approve of, whom she sees as a slacker. Elsewhere, in the sleeper Greenberg (2010) Ben Stiller plays a man who has found little aim in his life so moves back to his brother’s in Los Angeles and the tensions that that creates. The Squid and the Whale, meanwhile, is a deeply personal film that sees a match along some of the best of not only Woody Allen but also of Ingmar Bergman with the likes of Scenes From a Marriage (1972), yet Baumbach looks at the film through the eyes of young people. The only time that Woody Allen did this was with Radio Days (1987) but this film also relied on Allen himself as the narrator. Baumbach has also set the film perfectly within its time period without ever resorting to clichés. He does this with some irony, with Walt trying to pass off Pink Floyd’s ‘Hey You’ as his own song not only to his own family but also at a school talent concert which he duly wins. The acting is pitch perfect by all concerned with Eisenberg as the arrogant intellectual snob trying to tell his girlfriend about Kafka. She reads the book and discusses it with him. All he can muster is that it is very ‘Kafkaesque’. And indeed Baumbach’s view on relationships, like Kafka’s world view is human and existential.

Again this is a good package from the Criterion Collection with the best extra being a half hour documentary about the making of the film as well as other extras including audition rehearsals.