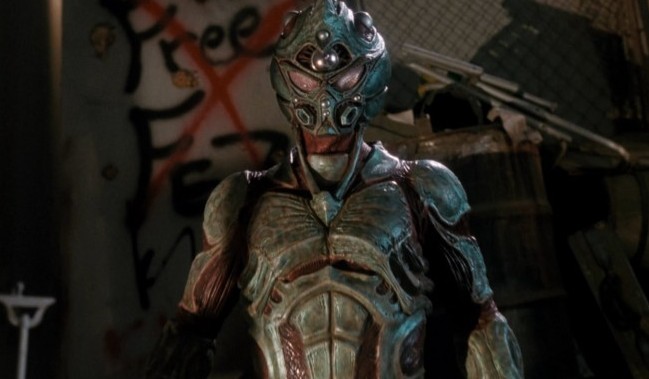 Like the Star Wars films, The Guyver (1991) opens with a written prologue telling of how an alien race, the Zoanoids came to Earth, living among the humans and are in search of the Guyver, a device that gives its owner super armoured powers. They are also able to shape shift and take on human form. Also like Star Wars, the film stars Luke Skywalker himself, Mark Hamill. Made some 8 years after Hamill’s last Star Wars films, The Return of the Jedi Hamill looks washed up in this low budget B movie and much aged, more as he appeared in last year’s The Force Awakens than in the earlier films. Produced by Brian Yuzna, The Guyver is based off a Japanese anime story and was in part financed by a Japanese company with a Japanese crew.

At the start of the film, a scientist is ambushed by thugs (one of whom maybe familiar as Pluto, the dome headed cannibal in The Hills Have Eyes, Michael Berryman) who are in search of this small Guyver contraption. They kill the scientist and having failed they report back to the CEO of the Chronos Corporation, Balcus (David Gale). He is angry at their failure. The gang then come across Sean Barker (Jack Armstrong), a karate novice who is also dating the daughter of the murdered scientist (Vivian Wu). They beat him up, but Sean finds the Guyver that possesses and inserts itself into Barker’s body. Barker becomes the Guyver meaning the device organically takes over his body turning him into a armoured alien machine. The gang also shape shift into mutant monsters and so begins the challenge of the gang to try and wrestle the device from him and defeat Guyver.

Released through Arrow Video, The Guyver received a very limited release in the UK but received a broader release in continental Europe (where it went under the title Mutronics). The film looks very cheap and the acting is really quite appalling. On one of the meatier extras on the disc, an interview with producer Yuzna, he goes on to state that he had high hopes for the film that never really happened and the film ended up a box-office dud (despite Hamill’s name being attached). Given that it was released so shortly after Teenage Mutant Ninja Turtles (1990) that is hardly surprising, seeing as it does seem to have a more adult bent to that juvenile action film. Where the film does excel in is its action, considering the constrictions of the fight sequences in costume with lots of fight sequences. And for that reason and that alone the film is not dull. It was also made just a few years after Yuzna’s first big hit, Reanimator (1985). Gale, who plays the main villain had a key role in Reanimator and died of a heart attack shortly after making this film. Also appearing in a small part as a mad scientist is Jeffrey Combs, the main bad guy in Reanimator. Another extra on the disc has an image gallery with all the posters and publicity stills for the film, particularly in the USA, France and Germany. One poster interestingly has Mark Hamill’s face half in shadow with the Guyver’s mask half over his face (with his name also at the top) giving the impression that Hamill is the Guyver. As ever a good package from Arrow Video with sufficient amount of contextualising extras.