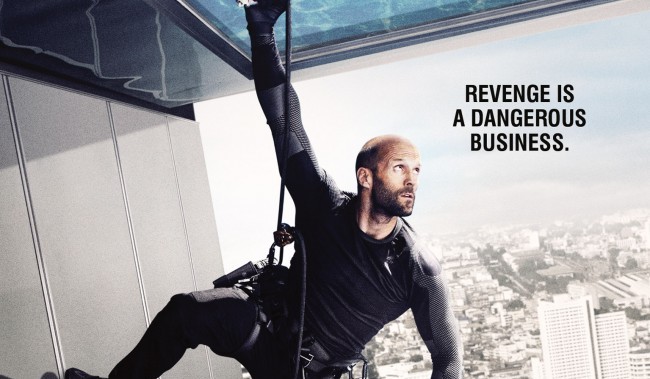 In 1972 Charles Bronson sparred against handsome surfer Jan Michael Vincent in Michael Winner’s action film The Mechanic. As night follows day, a loose remake was made in 2011 with Jason Statham in the role of Arthur Bishop, the private, intelligent and expert hit-man. At the end of both films we initially believe that Bishop has been killed but manages to walk away from the explosion that was supposed to kill him. However, unlike the 1972 film, Statham’s incarnation of Arthur Bishop returns in a sequel, the 2016 Mechanic: Resurrection.

The sequel opens in Rio de Janiero with Arthur Bishop, having faked his own death in the previous film is now living under an alias in Rio. He is tracked to a mountain top open air restaurant where a female agent to arms dealer Crain (Sam Hazeldine) tries to convince him at the point of a gun to go to her boss where he will be tasked to kill three people living under tight security. He escapes by throwing a table at her, knocking her out and beating seven bells out of the dozens of heavies who lay into him. Leaping off the mountain top restaurant there is a fight on a cable car with Bishop escaping by leaping onto a passing hang-glider. This should give an indication of where this film is going and its level of action. Bishop makes his way to Thailand where he meets up with his old friend Mei (Michelle Yeoh) who provides his logistics and goes into hiding again. A short while later he meets an American girl, Gina (Jessica Alba) after saving her from an attacker. However, she has been hired by Crain to entrap him, but this backfires when the pair end up falling for each other. Gina is kidnapped by Crain forcing Bishop to agree to Crain in return for Gina’s life to kill those he tasked him with: an African gun dealer on an Malaysian island prison, a man who lives in a high security penthouse in Malaysia and a Bulgarian gun dealer living in an underwater submarine base. Hi-octane action ensues.

There is little in the way of suspense but plenty of action in this adrenaline fuelled sequel. However, action without suspense does inure and threatens to bore the viewer. The action, especially the scene in which Bishop kills the man in his penthouse swimming people is particularly inventive, but the lack of suspense partly comes from Bishop appearing to be immortal as he seems to deflect no end of villains and bullets being thrown at him. With this action and the multiple world locations there are more than a handful of references to Jason Bourne and James Bond. Little surprise, therefore, that the 2nd unit direction (for much of the action) was directed by Vic Armstrong, a veteran of no end of James Bond films since he was a started as a stunt man on You Only Live Twice (1967). The underground submarine base has more than a few shades of James Bond about it as it recalls the action finale in The Spy Who Loved Me (1977). But it is not only this lack of suspense that holds the film back. Jason Statham is one of the best action stars of the past few years and is in generally in more entertaining films than those of say Dwayne ‘the Rock’ Johnson but here he seems disinterested, even a cardboard cut out as an actor. Jessica Alba has little more to do than look sexy in a bikini and is little more than being in a nominal Bond girl type of role. Normally Statham’s grunting adds an SAS type of element to his action heroes, but in this film he seems to be lacking any conviction or delivering much in the way of dialogue. Having said this though he carried out most of the stunts himself and, according to the extras on the disc added many suggestions to the action. For those interested, he also looks pretty buff too.

The picture looks sharp, showing off the locations to its best with lots of short interviews (1-2 minutes each) included on the disc, but will hardly go down as a classic, or even as Jason Statham’s best film.