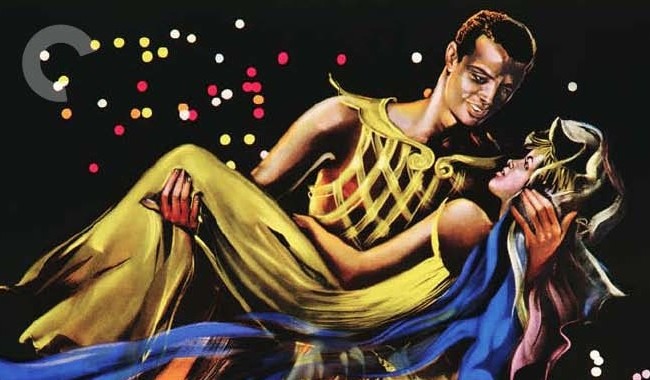 It’s Carnival time in Rio de Janeiro. Guitar playing tram driver Orfeu (Breno Mello) loves life and is charming with the ladies. He gets engaged to the sassy dancing Mira (Lourdes de Oliveira). At the registry office, the registrar jokes that with a name like Orfeu he should be marrying Eurydice. Mira asks who is this person he is having an affair with. Mira and Orfeu head back to their favela overlooking Rio to prepare for the carnival where he is a carnival judge and she is Queen of the Day. But Orfeu has met a girl he is entranced by in what he recognises as love at first sight. Ironically her name is Eurydice (played by the only non-Brazilian in the cast, Pittsburgh born Marpessa Dawn). Behind Mira’s back Orfeu seduces Eurydice and he is helped by his cousin Serafina (Lea Garcia) and others including local children. Meanwhile, Eurydice is afraid of a figure dressed as Death who is pursuing her. Tragedy is drawing nearer.

Although a French film rather than a Brazilian film this film did succeed in putting Brazil and particularly Rio de Janeiro on the cinematic map. Prior to this French film made by one of the so-called nouvelle-vague directors Marcel Camus, only Brazilian films for her national audience were made in the country. The story of Black Orpheus is based off the classical story of Orpheus and Eurydice about predicted doomed love and death and was adapted from ‘Orfeu da Conceição (Orpheus of the Conception)’, a stage play with music in three acts by Vinicius de Moraes with music by Antônio Carlos Jobim. The lyrical style of the play was rejected in favour of more naturalistic dialogue. Despite the films focus on the working-class folk of Rio the film still feels somewhat a picture postcard image of the city and its world famous carnival as the favelas overlooking Rio’s beaches and high rises are replaced in this film by the locals of the film living in an almost rural surrounding with a few shacks rather than the overcrowded fly infested slums dominating the landscape. Never the less the film has a great deal of poetry to it as well as naturalism. It was a success in France winning the Palme d’Or at the 1959 Cannes Film Festival. The film, the locales, the music and the working environs has a great deal of colour to it. The use of Samba and Bossa Nova (even then a new musical style, meaning New Style) with music by Jobin paved the way for the likes of Joao and Astrud Gilberto, Sergio Mendes and the great jazz musicians from Brazil and Latin America in the late 1950s and 1960s and is often noted for internationalising this music. Therefore the timing of the film, despite being little seen today, was perfect and came at a time in the burst of energy from Brazil as well as the year that the nouvelle vague burst on the scene the year that the film won its accolades in France. In many ways, and not often written the film does recall some of Luis Buñuel’s films being made in Mexico at the time with the struggles and poetic visions of the working-classes in these countries, most strangely played out in this film in the voodoo scene towards the end of the film. The focus of the carnival shows how those from the margins of society move to the centre during the time of carnival. Even the films title does focus on its blackness with the title. While it might seem what Carmen Jones (1954) is to Bizet’s ‘Carmen’ so this is to the classical story of Orpheus and Eurydice, to Brazilians this would seem strange as Brazil has a large Afro community.

Released on the Criterion Collection one can expect an extensive array of extras and on that the film does not disappoint. Among the extras are archival interviews with Marpessa Dawn from French TV filmed in 1962 and an interview with Camus from the 1959 Cannes Film Festival. In addition there are a couple of fascinating fairly short documentaries, one about re-visiting the film with a critical eye from Brazilian cinema scholar Robert Stam as well as a very interesting documentary about Samba and Bossa Nova and how this film helped push this new musical sound, especially in France and the United States. There is also a feature length French documentary on the impact of the film.