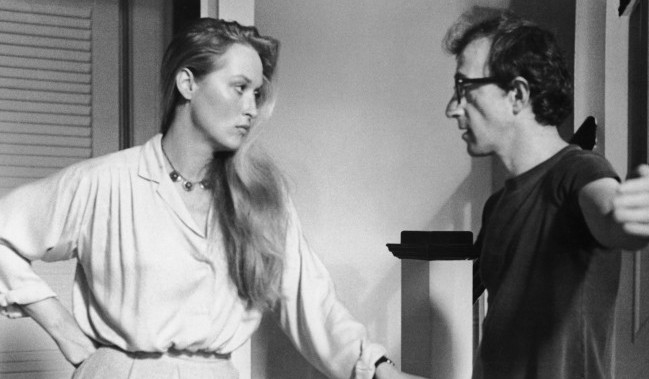 Last year Arrow Video, on their Academy sub-label released the 6 film box-set, ‘Woody Allen: Six Films – 1971-1978 covering (most) of the early period of Woody Allen’s oeuvre.  The new release in the box-set series (and there is another due for a release next month covering 1986-1991, the 3rd box set in the series) is a further 6 films covering the years 1977 – 1985. This 2nd box-set covers Allen from high art through to experimentation and, dare I say it, existential angst. In all three box-sets there is at least one film that can be called a masterpiece and earned high critical praise and awards. They are respectively, Annie Hall (1977), Manhattan (1979) and Hannah and Her Sisters (1986). The middle film, Manhattan, is the one included in this set.

From the first set to the second there is a clear maturity and development of ideas rather than what the alien visitors who say to the filmmaker suffering existential angst in Stardust Memories they criticise him and state that they “prefer your earlier films.” Manhattan followed in the footsteps of his previous two films, Annie Hall and Interiors (1978) (both released in the first box-set) in that Allen follows the lives, loves and culture of WASPish New Yorkers. He significantly shot the film in black and white using cinematographer Gordon Willis who had worked with Allen on those two previous films as well as Manhattan; he also shot all the films in this box-set. Interestingly this and 3 of the 6 films in the set are black and white. Also with Manhattan the aspect ratio of the film, 2.35:1 caused problems when it was first screened on TV with Allen threatening to claim against any station or cinema chain that changed that aspect ratio. He felt that this was how the film should be shown and the opening montage with Allen’s dialogue played out to George Gershwin’s ‘Rhapsody in Blue’ with the beautiful black and white montage’s of New York in perfect synchronicity.

The second film in the set is also in black and white, Stardust Memories (1980). In this film Allen plays a filmmaker recalling his past and present loves, this time mostly set in rundown looking coastal New Jersey. Even more than the morose Interiors, this is the most complex and experimental of his films to date. While it includes many great classic lines (“Only – and only art you can control. Art and masturbation. Two areas in which I am an absolute expert.”). The film was to date Woody Allen’s most Felliniesque film, in many ways his attempt to re-create Fellini’s 8½ and it’s art pretensions which certainly put some viewers off. Again Allen is not using black and white for budgetary reasons as much as artistic ones.

A Midsummer Night’s Sex Comedy (1982) moves his films away from the usual urban settings and instead chooses a more bucolic one, integrating some beautiful shots of nature (which works really well on the Blu-ray transfer) with the music of Mendelssohn. This comedy of manners does recall the more serious but equally pastoral Ingmar Bergman film Smiles of a Summer’s Night (1955). The story of A Midsummer Night’s Sex Comedy focuses on three couples who gather for a weekend in rural New Jersey. The home belongs to Andrew (Allen), a frenetic inventor and city banker who is married to Adrian (Mary Steenburgen) who has not wanted sex for over 6 months. Arriving for the weekend is his old doctor friend and sexual predator Dr. Maxwell Jordan (Allen regular Tony Roberts) and the seemingly innocent nympho nurse from his office, Dulcy (Julie Hagerty). The third couple are the older arrogant professor of philosophy Leopold (in a wonderful performance by Jose Ferrer) who is due to be married to Ariel (Mia Farrow in her first of 13 roles in a Woody Allen film), but is also a former almost lover of Andrew’s when they were much younger which he tries to hide from his wife. Woody’s film manages to avoid too much farce, something it could have so easily have given in to and instead is filled with much poetry and comedy.

The next film takes art and experimentation to an even greater level than Stardust Memories with Zelig (1983). Although short at only 79 minutes it does feel like a single idea extended to feature length and drags somewhat. The plot is set in the 1920s and 30s and focuses on Leonard Zelig (Allen) who was so badly emotionally abused by his parents and everyone who knew him that he morphs into the personalities of the people he is amongst in order that he socially blends in, whether they are African Americans, Hasidic Jews or Nazis, even inspiring a hit song, ‘Do the The Chameleon’. Not short of a few good jokes it is innovatively shot as a period newsreel in its entirety which can get a little tiring at times. Once again Mia Farrow is the love interest as Zelig’s psychologist.

The next film he made in sequence is the third film in black and white, the straighter comedy, Broadway Danny Rose (1984). Woody acts it up as  the wormy Jewish talent agent Danny Rose who’s acts include a dreadful stuttering ventriloquist, balloon folders and a one legged parrot. One act he puts all his energies into is Lou Canova (Nick Apollo Forte, in his only film role), a has been Brooklyn Italian singer who had a hit à la Louis Prima many years ago and is having an affair with a brassy gangster’s moll (Farrow again in a very different role for her). Of course the mafia are after her and Allen, who they mistake as the ‘beard’.

The final film is the celebrated philosophical film, The Purple Rose of Cairo (1985), with Farrow in the lead, cinematography by Gordon Willis and regular producers and editors, but this time Allen is behind the camera. The plot is set in a New Jersey town in Depression hit 1930s with Farrow playing a meek waitress who dreams of her cinema idols. When her favorite actor Tom Baxter (Jeff Daniels) walks off the screen and falls in love with her she sees an opportunity to run away from her unemployed abusive husband (Danny Aiello). There is a high degree of magic, love of cinema and intellectual comedy about this film, something that pokes through most of his films.

With the next box-set, due for release in February a further seven films will cover 1986-1991 and another welcome grouping of films. All classics to one degree or another. There are no extras other than trailers on each disc.