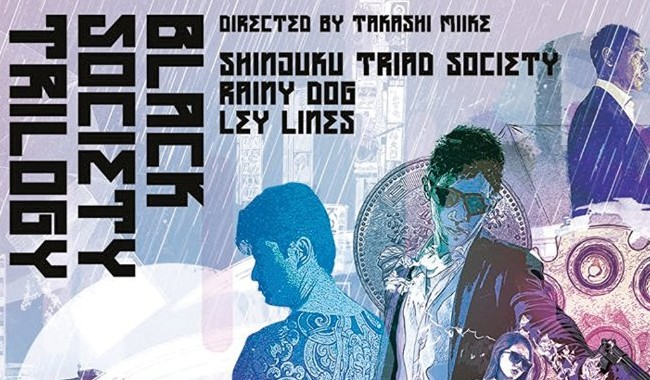 Japanese filmmaker Takashi Miike has been a very prolific filmmaker and more than this a controversial filmmaker. Such films as Visitor Q (2001) included repulsive scenes of incest and cannibalism. Another mark of his films show scenes of sudden shocking violence most famously portrayed in the cult classic Audition (1999). In the latest release by Arrow Video, a trilogy of films by Miike called The Black Society Trilogy these sudden bursts of violence are also evident. Like many of his films there is also a focus on the yakuza or mafia underworld society. Miike had been a student of master filmmaker Shohei Imamura and in the 1990s he became a proponent of what became known as V-Cinema, genre films that had been made direct-to-video giving them much more freedom for filmmakers to make the films they want to make without studio interference. He became what one writer referred to as “a poster boy for Asia Extreme” and the films included here are examples of that. But The Black Society Trilogy became a departure for Miike and set him on a new course. These were to be his first theatrical releases and made for a major studio, Daiei.

The next film, Rainy Dog (1997) made just two years later is about a Japanese hitman (Show Aikawa) who has been stranded in Taiwan, having been fired from a yakuza syndicate. A former prostitute and the man’s one-time lover leaves a young mute boy who she says is his son drops the boy off. The man seems non-plussed by the new turn-up even after the boy witnesses a killing. Cold and seemingly unfeeling the prostitute and the hitman begin to have some sort of relationship. Of course other gangsters are also after and pursue him, endangering the lives of all.

The final film in the trilogy is Ley Lines (1999), made just before Miike made Audition. Ley Lines is the story is about three male wayward youths who grew up together. The lads befriend an abused Shanghai prostitute who has faced all sorts of abuse from gangs, individuals and pimps and between her and the other men they fall foul of a gang, steal their money and go in the run.

The first film in the trilogy, Shinjuku Triad Society looks cheap and has the controversial elements of V-Cinema whereas in Rainy Dog, which is beautifully shot and mostly seems to have been shot in the rain. An extra on the disc is an interview with Aikawa who talks about his working relationship with Miike (he is also in Ley Lines) and how the director had originally appeared to him on the set of an Imamura film thinking he was a crew member, as well as the shooting difficulties on Rainy Dog and the lengthy process that Miike undertakes in filming action sequences. While these films may not be important they do show the progress as a filmmaker of Takashi Miike and an understanding of where he came from in any future films, many of the themes of these films were included in another key film by Miike, City of Lost Souls (2000). Takashi Miike’s films are seldom enjoyable and are more often than not hard viewing. In a word they are not for all tastes and should be approached with these thoughts in mind.