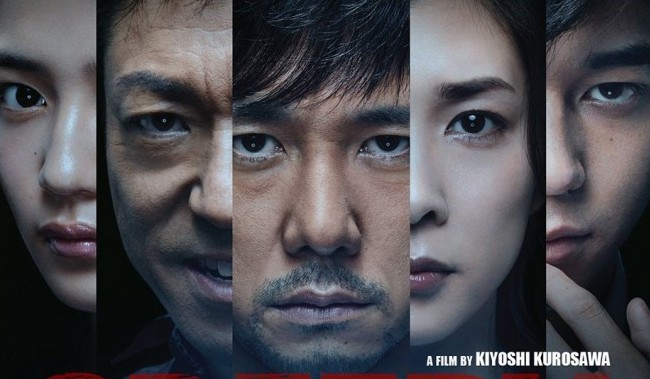 Kiyoshi Kurosawa (no relation to Akira Kurosawa, the master of many a Japanese classic) is one of the most interesting and exciting of Japan’s directors at the moment and a pleasant surprise to see him returning to the genre he gained international recognition in, namely the cross-over thriller and  horror film. He first became known internationally with Cure (1997) and in more ways than one this film has some resemblances to that film. Cure is about a cop with emotional and personal problems who is investigating a series of murders apparently carried out by a serial killer in which many of the murders show similar trademarks. There is a supernatural element to these killings whereby the killer possesses and creates another killer when he comes into contact with them.

Similarly in Kurosawa’s latest film Creepy (it also has similar elements). The film opens with a police detective, Koichi (Hidetoshi Nishijima) who tries to talk down a captured killer who has broken loose in a police station. He has a female victim hostage with a knife at her throat. When Koichi tries to negotiate with the killer he turns his back on him out of trust and is stabbed in the back while the hostage’s throat is slashed. The killer is shot dead. A year later Koichi has left the force and is lecturing at university on criminology. He and his wife, Yasuko (Yoko Takeochi) have just moved into a new suburban neighbourhood. They find their new neighbours unwelcoming. His wife starts talking to one neighbour, the seemingly socially inept and strange looking Nishino (Teruyuki Kagawa) who lives alone with his daughter Mio (Ryoko Fujino) and apparent sick wife. Meanwhile, Koichi is drawn back into investigating a cold case involving the disappearance of members of a family and a serial killer and tracks down a survivor. On investigating the girl’s neighbour’s house police discover shrink wrapped corpses. One day teenage Mio tells Koichi that the man who claims to be her father is not actually her father and is a complete stranger. When Yasuko goes round to Nishino’s house she falls into a world of horrors in which he seems to hypnotize her while Koichi puts the two stories together.

In German there is a word they have for the uncanny and that is unheimlich, which in a direct translation means ‘unhomely’ and this is the key to understanding much of Kurosawa’s work in which he imbues the everyday and banal with an uncanny and unsettling feeling, whether it is in the more outright horror such as Pulse (2001) or a more subtle and slow burning kind of film like Creepy. Whichever film you watch, there is a sense that the principles in his films are moving towards the deadly we have been telegraphed with open eyes, much like the victims of Nishino walk into his spider’s web. It’s a deliberate slow burning film (with quite a long length at 130 minutes) and allows the viewer to become involved in the suburban lives. There also deliberate holes in the plot keeping the viewer guessing, such as what is the chemical Nishino injects into his victims or how is he able to hypnotize his victims willingly. It might not be Kurosawa’s best film but is a return to genre form after a hiatus.

I for one applaud that Eureka! have chosen to release some of Kurosawa’s  films in their Masters of Cinema series, including another recent film released last Summer, the gentle ghost story Journey to the Shore. Eureka! have also released Tokyo Sonata (2008) in the same series. I have been watching his films with keen interest for the past 12 years or so and very few have been released in the UK; Cure is still to receive a UK release. Later this month Arrow Video are also to release Pulse, a film made at the height of the craze for J-Horror, itself a creepy horror film in which people become possessed by an evil spirit through their computers. Once again a Kurosawa was denied a UK release and receives it’s long awaited debut in the UK, although was released here as a Hollywood remake that did receive a release in 2006. His spooky ghost story Retribution (2006) has also not seen the light of day here. The images look fine and the only extra other than a trailer is an interview with Kurosawa. There are other films of Kurosawa’s out there ripe for the re-evaluation.