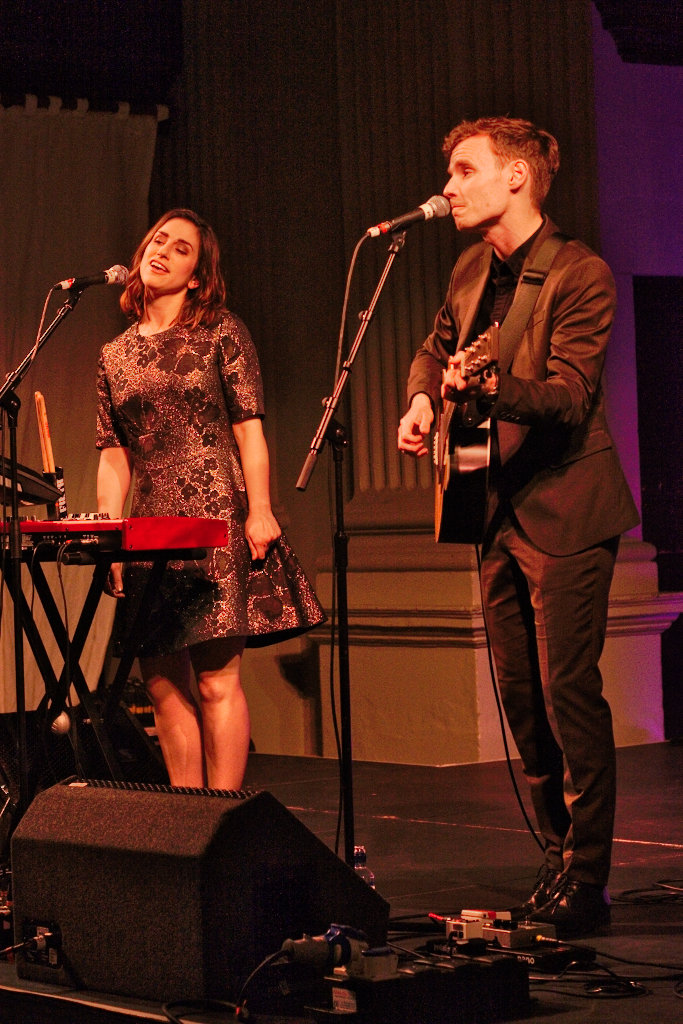 Lewis and Leigh – St Andrew’s On The Square, Glasgow

Two male – female folk duos provided a fine night of entertainment in another show from Glasgow’s internationally renowned Celtic Connections festival. St Andrew’s On The Square, a beautifully converted 18th century former church with superb acoustics, was the perfect venue for a large crowd to enjoy some beautiful music.

Openers Bella And The Bear (Lauren Gilmour and Stuart Ramage) have only been playing together for a couple of years, but have already won several awards for their music. As recipients of a Danny Kyle award at last year’s Celtic Connections, they gained the opportunity to play again and this show suited them perfectly.

Bella And The Bear have a lovely line in slow and melancholic folk tales, matching Gilmour’s powerful vocals with Ramage’s often high harmonies and delicate guitar playing. Occasional spoken word sections give their music a highly poetic feel. The slow and passionate Rain was a highlight before the pair were joined on stage by a string quartet, which gave a lovely depth to the music for the elegant Little Boat.

A fine, tender interpretation of the Burns poem Ae Fond Kiss sounded like a traditional folk song with a violin backing the vocals. This s a regular part of the duo’s set – although it was highly appropriate here as the lover Burns wrote the poem for was actually married in the very church they were playing.

Lewis and Leigh are Al Lewis from Wales and Alva Leigh from Mississippi, who first met in London through a mutual friend from Nashville and began making music together three years ago. Several EPs and an excellent debut album have followed to some fine reviews. They call their music Celticana – a sweet and vibrant acoustic sound with country, blues and folk influences. The duo arrived in Glasgow to play the opening night of their first headline UK tour fresh from the Americana Music Awards in London – where they picked up the prizes for best album and best song.

With a set built around their debut album, Ghost, Lewis and Leigh showed the full range of their talents. Both have lovely voices as they take turns to lead, hers passionate and his mellow, and when they work together the result is quite exceptional. With Al switching between acoustic and semi acoustic guitars and Alva adding keyboards and occasional beats from a drum machine, the rhythms are varied and the backing perfectly designed to complement the vocals.

There were many highlights in the set. The opening two tracks of the album, There Is A Light and Rubble were played together to form a seamless ode to their respective homes, stretching from the Bayou to the Valleys and covering everything from industrial decline and the closure of mines to Hurricane Katrina. The slow and sad Losing Time and Whiskey And Wine, a song of longing, were also very well received. Heartbeat has a different sound, a beautiful slow song of loss with a delicate drum beat marking time throughout.

Some older songs were played too. The bluesy guitar licks of Late Show contrasted with the sublime lovelorn vocals of All Nigh Drive. Only Fifteen, an emotional yet uplifting tale of teenage pregnancy, telling of an adopted boy finding his birth mother who had been forced to give him up by her family, was played out superbly. The one cover of the set derived from a recent tour supporting Deacon Blue, a delicate slow version of Real Gone Kid that transformed the song totally.

The set ended too soon for the large crowd, many of whom were seeing the pair for the first time. Lewis and Leigh were soon back on stage for an encore, but immediately headed for the middle of the audience to perform the Americana song of the year, The 4:19, to a rapt crowd who sat in perfect silence as the vocals soared. It was a stylish end to a very good night of music.

Al Lewis and Alva Leigh are both very talented musicians and their differing backgrounds and musical influences blend together perfectly to create a sweet and uplifting sound. They are confident and entertaining live performers, and will be playing all over the UK in the coming weeks – take the chance to check them out.

Venue: St Andrew’s On The Square, Glasgow
Support Band: Bella and the Bear