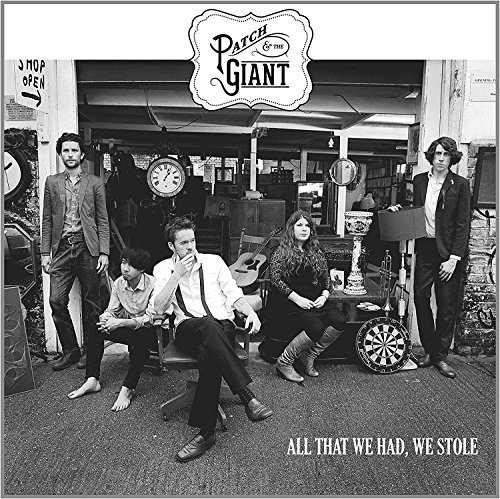 Patch And The Giant – All That We Had, We Stole

The debut album from British indie-folk band Patch And The Giant is a good mix of the traditional and the modern. At its core is a melodic, multi-instrumental folk sound, but there are elements of blues and rock that give variety behind the poetic lyrics. The album was recorded as live, giving it a vibrant and energetic sound and it should have appeal beyond folk music fans.

All That We Had, We Stole is the culmination of several years’ hard work. With a good reputation as live performers established, it has taken a while for the band to get to the stage of releasing this album, although a number of its tracks were written several years back and will be familiar to fans. Luke Owen’s beautifully textured vocals are backed not only by guitar and drums but also harmonica, banjo, keyboards, cello and a range of brass instruments to create an eclectic set of sounds.

Opening track The Beggar’s Song has the strident feel of an old style protest song and is already getting some national radio play. The River is slower, a sad song that comes closer to a traditional folk sound with some lovely guitar picking. Love And War, re-recorded from an earlier EP, is similar with tender and world weary vocals. A Local Man, another older track, sees a violin intro and fast drum beat leading into a fine fast paced chorus.

The variety comes throughout the album, with a number of different sounds also represented. The Day You Went To Sea is an emotional song of loss, sombre and dripping with emotion. Another Day has a jaunty introduction and a more upbeat sound. The band’s single Flowers, released back in September, is a delicate acoustic love song. America mixes folk with trumpets to create a joyful and timeless track full of optimism, and might just be the best track here.

All That We Had, We Stole Is a good collection of songs that never really settles. Its varied sound and changes of pace keep things interesting and the standard of musicianship is high throughout. The band will be promoting the album with a short tour, promoted by Glasswerk, and kicking off with the official album release show at London’s Brewhouse on 10 February.

Venue: All That We Had, We Stole
Support Band: self