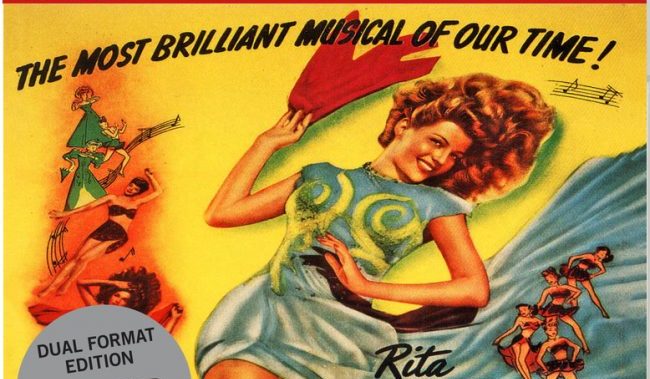 The current success of La La Land highlights that the musical is still a relevant genre. That particular film harks back to the MGM musicals of the 1950s and the latest release by Eureka! in their Masters of Cinema series pre-dates in many ways what was the forerunner of the Arthur Freed MGM musicals and in addition, although they didn’t realise it yet brought together the talents of Gene Kelly and a 20-year-old Stanley Donen who was brought in to assist with the choreography. Together they went on to make Singin’ in the Rain (1952). The plot of Cover Girl (1944) is very basic and the type of cliche so common among musicals. The story follows a couple working in a small Brooklyn cabaret club in Brooklyn. The club is owned by a war veteran, Danny Maguire (Gene Kelly) (making clear that he is a veteran to the audience at the time may have questioned why he a healthy and very fit young man would not be in the forces) who is in love with his lead dance girl and performer Rusty Parker (Rita Hayworth), a flaming red headed beauty. After a conversation with a fellow chorus dancer she ends up at a model audition for a high class magazine. She is spotted there by the wealthy John Courdair (Otto Kruger) who recognises and finds out that she is the granddaughter of a sweetheart from his youth who jilted him at the altar. He then entices her with promises of success and sets her up with a charming playboy that threatens her relationship with Danny.

The story of a chorus girl/singer having to choose between a poor hoofer whom she really loves and the promise of fame and success is hardly an original one. In all honesty it doesn’t really matter and is almost to be expected as the focus is on the style, the romance and the song and dance numbers. Rita Hayworth had already danced in a couple of films with Fred Astaire (You’ll Never Get Rich, 1941 and You Were Never Lovelier, 1942). Although she had been shot in Technicolor before, the cinematographer was Rudolph Maté and he perfectly captured her flaming red hair and beauty. So impressed was Hayworth and others at Columbia with Maté that he shot her next four films and always remained her favourite cinematographer and his other credits with Hayworth included the film noir thriller, Gilda (1946). Kelly, meanwhile was borrowed from MGM and had already had some success there with such musicals as his first film, For Me and My Gal (1942) with Judy Garland and amazingly Columbia gave Kelly free reign to control the film and played a big part in directing the dance numbers he was in. Ironic then that it was when he was loned out to another studio that the style of his future MGM films was created.

The songs themselves, by no less a great songwriting pair as Jerome Kern and Irving Berlin did not produce any memorable tunes. The opening showgirl tune, ‘The Show Must Go On’ is deliberately shambolic but the film has Kelly’s first classic and keynote dance number, ‘Alter Ego’. In this number Kelly is walking down an empty Brooklyn street at night (very obviously a set). He catches his reflections in a window when the ‘reflection’ jumps out and dances with him as if a transparent ghost. This number is clearly a part of Kelly’s genius as being more than a talented song and dance man as he wanted the number to heighten the emotional journey his character was on. This is also where both Donen and Kelly began to collaborate. Again, as with future Kelly routines, there was a strong influence of the urban environment (even when it is an obvious set) in which Kelly’s brand of dancing moved the musical away from the stage and the nightclub floor. The genesis of the famous number ‘Singin’ in the Rain’ can be seen in this film.

Cover Girl has been presented here in a 4K restoration and while there is still some grain on the film the colours are incredibly sharp and vivid, beautifully bringing out the bright colours of Hayworth’s costumes. The only extra on the disc apart from the especially edited trailer for Eureka! is a short interview with Baz Luhrmann on the influence of Cover Girl.