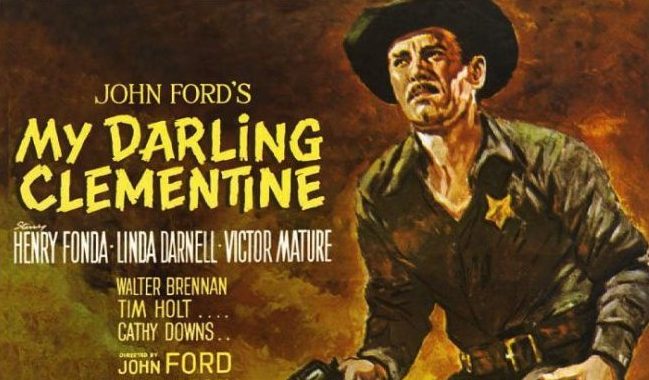 No one director or filmmaker did more to build a myth of the Old West in our minds than John Ford. For him to be accurate with his storytelling was not important but about the characters, the spirit and the storytelling of the Old West was. For example in My Darling Clementine (1946) Ford re-tells that most legendary of all Wild West stories, that of Wyatt Earp, Doc Holliday and the gunfight at the OK Corral. As many a kid will tell you (or they used to when the Western still mattered), the event happened in the frontier town of Tombstone, Arizona. The backdrop for Ford’s Tombstone is his beloved and iconic Monument Valley, which in reality is on the borders of Nevada and Utah, nowhere near the Mexican border. But this does not matter to Ford. He personally knew Wyatt Earp (who died in 1929) and even Earp himself liked to create his own mythology about the gunfight at the OK Corral. In fact for the shootout itself, Ford filmed it the way Earp told it to him.

The gunfight at the OK Corral, the fabled shootout between Wyatt Earp and Doc Holliday on one side and the Clanton family on the other took place on 26th October 1881 and lasted for a total of about 30 seconds (in the film it curiously takes place in 1882). Where Ford was always accurate was in the clothing and the sense of the period, or the ‘spirit’ of the Old West. This is an idealised Wyatt Earp (played here by Henry Fonda) representing goodness and in many ways recalling the character he played in the even darker moral western, The Ox Bow Incident (1943) (released last year on the Arrow Academy label). The film opens with the Earp brothers herding cattle through on a cattle train. The brothers arrive at Tombstone one wet night. The elder brothers make their way ahead as the border town was already notorious for its lawlessness and without a marshal. They leave younger brother James to look after the cattle. When they return James has been murdered and the cattle rustled. Wyatt Earp decides to take up the town’s offer to become marshal to find out who the murderer(s) are. He develops an uneasy friendship with former surgeon and now ill drunk Doc Holliday (Victor Mature). Tension between the two becomes greater when Doc’s ex-fiancee, Clementine (Cathy Downs) rides in on a stagecoach. She represents respectability and stability and draws Earp into accompanying her to the local hoe-down for the inauguration of a new church, the first in Tombstone. Suspicion for the killing on young James Earp falls on the Clanton family, led by Old Man Clanton (Walter Brennan).

Ford merges two myths in this film: on the one hand there is the myth of the gunfight and the players and on the other is the American folk song heard throughout the film and even at one point whistled by Wyatt Earp. (Of course the Clementine in the film is complete fiction.) Music was always very important in a John Ford western and helps build the mythology as folk. Elsewhere we hear ‘Old Susanna’, ‘Camptown Races’ and ‘Bringing in the Shears’ when the local folks gather for the church inauguration. For further authenticity he would, where he could film on location rather than the confines of a studio (Death Valley for Three Godfathers, 1948 or Ireland for The Quiet Man, 1952 as well as the films shot in Monument Valley). It was often said if anyone else filmed in Death Valley, Ford could sue them for copyright.

This is one of Ford’s darkest films; hardly surprising as it was made shortly after the end of the Second World War where Ford lost an eye filming his documentary, The Battle of Midway, 1942 and the dark tone of the film clearly references this post-war reflection. The themes are dark and the chiaroscuro cinematography by Joseph MacDonald is filled with dark tones and shadows, especially in the opening 20 minutes with an unshaven Fonda arriving in a wet and muddy Tombstone at the start of the film. Part of the film is about the journey of Earp appearing with his brothers as tough and ready frontiersman and because of his inherent goodness and strong values becomes civilised as the film develops (with a good woman being a strong civilising factor), but not enough that he should stay in the town at the end of the film (another trait of Ford films, the hero going off alone back to the wilderness – think of John Wayne disappearing through the door at the end of The Searchers, 1956). Conversely, Mature’s Doc Holliday is one of Ford’s darkest characters, until John Wayne’s Ethan Edwards in The Searchers at any rate. Dressed in black, he plays Holliday as a damaged dandy set on a course of self-destruction with a Freudian Death Wish.

The extras on the disc are plentiful, including a wonderful documentary on John Ford’s 9 films he shot in Monument Valley studying each of the films and including 1970s interviews with Wayne, Ford, Fonda and James Stewart on the importance of the place in Ford’s canon of the films shot there. Peter Cowie, author of ‘John Ford and the American West’ also talks at some length about the location, films and the paintings of the Old West that inspired Ford. There is also a very engaging and poetic visual essay of the film by Tag Gallagher. One other extra is an episode of Channel 4’s ‘Masterclass’ in which British director Lindsay Anderson talks about why My Darling Clementine is his favourite film. A full package of one of the greatest of westerns from the man who once said “My name is John Ford and I make westerns.”