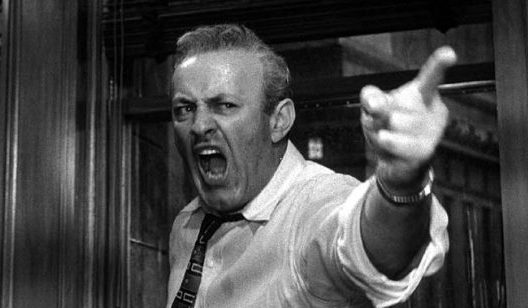 Born in New York in 1911 to Jewish emigre parents, Lee J. Cobb (born Leo Jacob) is a character actor different to many. Always disappointed he was never a leading man in a major film, he established himself as a stage actor of some repute and by the 1950s as a character actor of note. To a more modern audience he is perhaps best known as the investigating police lieutenant in The Exorcist (1973), made right at the end of an illustrious career, a career that Cobb felt was disappointing.

Dewey’s book, ‘Lee J. Cobb: Characters of an Actor’, is not a conventional biography. Yes, it’s chronological in covering Cobb’s career in its entirety, but it is also a text and theory book on the so-called Method style of acting. As an actor, Cobb was working during an interesting phase in American acting that covered cinema, the stage and even the early days of television when the latter medium, unlike today was considered a downgrade for an actor. In the 1950s television was in direct competition with cinema and Cobb, although he acted in some good TV dramas following a near fatal heart attack in 1955, he also felt that this was not career progress and represented a career downturn. By the early 1960s Cobb was receiving fewer offers for roles and the challenge of acting on the stage led to a 4 year stint on the classic TV western series, ‘The Virginian’, a role many said he felt was beneath him (he appeared in the western show between 1962-66).

In his early career, both on stage and the big screen, Cobb was always playing characters older than his real age, such as ‘Papa’ Bonaparte in ‘Golden Boy’ (a role he repeated in the 1939 film of the same name). This pattern would repeat throughout his career. He was an actor of the ‘Method’ school in New York in which he worked with the likes of founders Luther and Stella Adler, as well as Franchet Tone and most significantly Elia Kazan in the Group Theatre. This part of the biography discusses at great length the theory of the Method style and can be argued to be very different in writing style to the rest of the book. The New York stage led Cobb into one of his most celebrated stage roles, that of the lead part, Willy Loman in Arthur Miller’s ‘Death of a Salesman’ in 1949 – giving Cobb the lead role he had strived for. The stage exposed Cobb to the left wing politics of the New York theatre scene. But in the post-war period of America left wing socialism was synonymous with communism as far as the right-wing McCarthyists and the subsequent witch hunts were concerned. Some in Hollywood, such as the Bogarts protested while others were indicted, including Kazan and Cobb. They were derided by colleagues for exchanging blacklisting for ratting on industry colleagues and subsequently ending careers. For a while this led to many not speaking to either men again for selling them out. This also soured the relationship between Cobb and Kazan. There were two films Cobb made that directly linked Unions and shadowy figures to ‘communism’: the underrated Thieves Highway (1949) about Californian fruit truck drivers and the classic On the Waterfront (1954 directed by Kazan) starring Marlon Brando as a dock worker who eventually goes up against a Union boss (Cobb); Cobb’s Union boss is linked to being a mobster here.

Throughout the rest of his career Cobb was resigned to mostly character roles. He has cast as a leading man and even ‘love interest’ as a cop who covers for the murder of his girlfriend’s husband in the little seen The Man Who Cheated Himself (1950). But probably his biggest role was as Juror No. 3 in Sidney Lumet’s adaptation of Reginald Rose’s play, 12 Angry Men (1957). Set entirely within the confines of the jury deliberation room in which one juror (played by Henry Fonda) believes that the suspect is innocent and manages to convince the other jurors that he is innocent. The bullish Cobb is the last to stubbornly hold out. This role gave full range to Cobb’s acting talents, even if it was the kind of character Cobb often played.

Cobb died in 1976 of a heart attack with The Exorcist, if not his last role, his last role of some note. For him to be a lead actor was always going to be a challenge given his build and demeanor. He always made the most of his roles as a tough cop, a tough businessman, mobster or family patriarch in the many westerns (on both the big and small screens) he appeared in. Cobb also lost his hair at a young age which would have made him look older. However, as the book attests to he was very self-conscious of this and nearly always wore a toupee; you could count on one hand the films in which appeared bald. It is often the case that the book is patchy in places, a little dull when discussing the New York Theatre Group or even his home life, but is at its best when discussing his films, his character and particularly the complexities of the McCarthy witch hunts. The book is not afraid to delve into Cobb’s neuroses and insecurities, something the actor himself was also not afraid to explore.