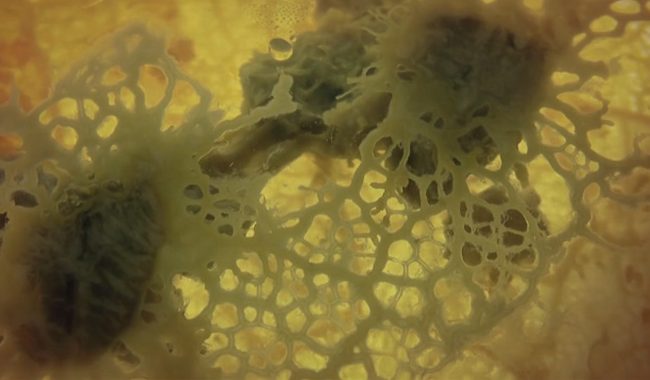 The Creeping Garden is a real curiosity. No, this is not a mocumentary but a project about an area of biology hitherto not often researched, plasmodial slime. The documentary draws in field biology science, histories of macro stop motion photography, biological design and even computer and robot technology, gelled together by the film’s directors Tim Grabbham (he is also credited with the cinematography) and Jasper Sharp. There is also a strange futuristic ambient score by former Sonic Youth member Jim O’Rourke who has also produced albums for the likes of Sterolab, Beth Orton and Wilco as well as Sonic Youth. As an extra disc there is also a CD included with the O’Rourke’s score. The soundtrack and imagery also works well in the documentary acting as a visual art piece, inter-cut with interviews with the above mentioned disciplines and those with an interest in plasmodial mould. But this is part of the problem with the documentary that the style of the documentary hops around, blending genuine scientific developments, art experiment with quirky fringe scientists promoting the uses and existence of growing plasmodial slime mould.

Seen under the microscope this plasmordial slime looks other worldly and, dare I say it even science fiction (working alongside O’Rourke’s score). In places the film does feel like a trippy 1970s piece of experimental or New Age cinema with some macro filming looking more like a psychedelic coloured oil show. Elsewhere in the documentary, Science Museum curator Tim Boon  jumps back to the late 19th and early 20th century looking at Magic Lantern shows and the kaleidoscopic and solarised photographic devlopments by the likes of pioneer Percy Smith that created a spectacle for Modernist entertainment in show stop motion filming of funghi. What is being suggested here is the link between scientific and artistic development. Yet, it all remains very quirky. The directors clearly are not scientists but artists and filmmakers and they explore this eccentricity of the subject with its other worldliness, aided by archived NBC footage from the 1960s of moving and growing slime found in a Texas back yard, giving further credence to the sci-fi element to the documentary.

It is certainly not for all tastes, it would be fair to say in fact, only for a limited few. Looking beyond the imagery it can wear out its welcome quite quickly. The disc is replete with extras, aside from the aforementioned CD with a series of short films showing macro slow or stop motion photography such as ‘Milk’.