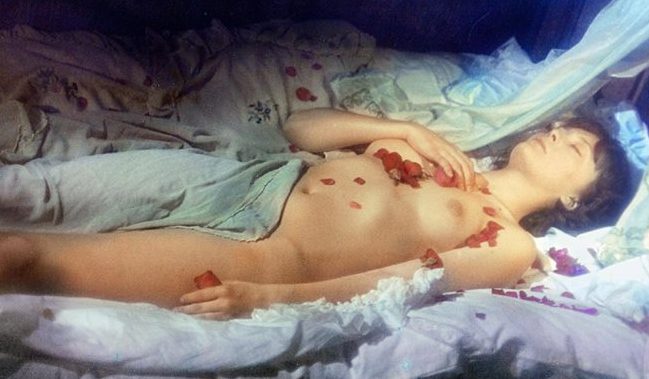 Walerian Borowczyk’s Story of Sin is set at the turn of the 20th century. It opens with a young teenage woman in a confessional being chastised by a priest for her ‘impure thoughts and feelings’. And so it goes that this young woman, Ewa goes through a journey of sexual awakening. She is from a petit bourgeois family who take in boarders. One day a man called Jerzy Zelnik comes to stay and the couple fall in love. The trouble is that he is older and married. This is the beginning of Ewa’s downfall: the shame she brings on her family, her expulsion, a relationship with a Count, infanticide, murder and prostitution. Her downfall is shocking.

The film itself does feel a touch overlong and arguably could have benefited from tighter editing, but as the film draws to its conclusion it does become more engaging once Ewa’s downfall is inevitable. The films most shocking moment and one that after it happens is little mentioned, making it all the more shocking. Ewa has hidden herself away after becoming pregnant with the Count’s child. She goes through labour and eventually gives birth to the child. On the soundtrack there is a brief cry of the baby that cuts to a shot of a toilet and the viewer is left in no doubt that the child has been murdered by its mother. Any sympathy for Ewa’s character is lost here and her downfall as a cold and ruthless prostitute gives the viewer little sympathy for her.

The disc is replete with extras, beginning with an interesting context forming introduction by Andrzej Klimowski, an artist who works in montage and simple animation and produced the specially commissioned and wonderful Hannah Höch like cover to the disc. With this and several of his animated films covered here there is evidence of a Dada or Surrealist influenced use of collage in which (more popularly parodied by Terry Gilliam for Monty Python) he takes 19th century or Baroque imagery and animates them, both literally or symbolically grinding the cut-outs through a meat grinder. Borowczyk’s close links to ideas explored in Dada and Surrealism are very evident here as he draws on art history and politics. There is also a superb 1957 Polish documentary short on the disc that covers a history of poster art. All these films stand out on their own and will be a revelation to many.

The picture image is superb in the restored 2K restoration bringing out the camerawork of Zygmunt Samosiuk. The mise-en-scène and the marrying of image and soundtrack is most Other extras include short films and an interview with the films leading lady, Grazyna Dlugolecka and best of all a visual, non-narrated essay of Borowczyk’s obsessions made by Daniel Bird.