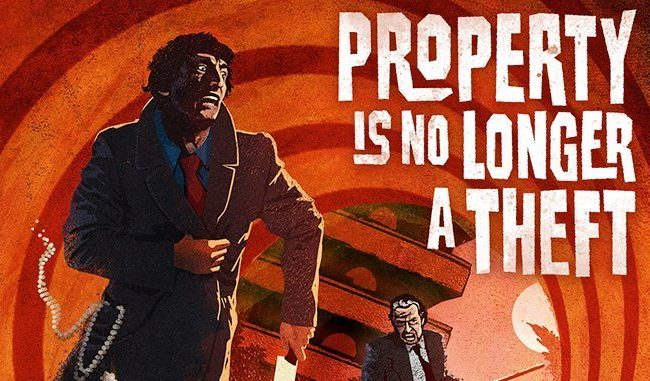 Property is No Longer a Theft (1973) Blu-ray Review

As the title would suggest, Property is No Longer a Theft (1973) is a film with a Marxist Socialist agenda. The story centres on a young bank worker, a cashier who looks after the bank’s safe. He wears gloves in his job as he has an allergy to money and really has no love for the stuff but likes the freedom it offers. A customer of the bank, a butcher (Ugo Tognazzi) visits the bank to ask for a loan from the bank manager. He is a successful and wealthy property owner making a great deal of money from real estate. He asks for a loan of millions of lira from the manager. After the bank worker, Total (Flavio Bucci) also asks for a sizeable loan he is laughed at by the manager. Indignant, Total tells his employer exactly what he thinks of him and walks out on his job, burning a note on his way out. “Sacrilege” shouts the manager. But the target for Total’s revenge is not the bank manager but the butcher whom he sees as representing capitalist greed. He starts small, stealing the butcher’s fetshised objects that represent him, starting with a butcher’s knife before stealing a car and eventually his glam girlfriend, Anita (Daria Nicolodi) and objects in their modern apartment. But Total soon comes to relise that all these things don’t mean anything and that these objects become mere fetishised symbols. Both Total and the butcher start to feel the pressure of their crimes and in particular for the butcher who is trying to hide an insurance fraud.

Property is No Longer a Theft feels in places like a black comedy, but is not really a comedy and is more an arthouse crime film. Starring popular Italian actor Tognazzi it is a thematic follow-up to director and scriptwriter Elio Petri’s previous international hit and critically acclaimed, Investigation of a Citizen Above Suspicion (1970) but this film is somewhat more flawed than his earlier film. At 126 minutes it does seem somewhat overlong and drags in places but Tognazzi is solid while unknown Bucci is wonderfully nervous as the erratic Total. Bucci would go on to appear in many of Dario Argento’s horror films. What makes the film drag is that there are no symathetic characters in the film. Tognazzi is in many ways a stock villain as the capitalist, but is also a solidly played. Tognazzi had also appeared in a similar role in the brilliant all star French film, La Grande Bouffe the same year as this film.

Political satire it is, but is not among the great political films of Costa-Gavras or contain the stylisation of Fellini for example. Yet it does have a modernist aesthetic to it that works well, such as the mise-en-scene of the butchers interior when Total steals the cutting knife. Layered onto this is a soundtrack by Ennio Morricone, and although there is no catchy melody here or sweeping score instead the composer has added an experimental electronic score such as that played over the strange opening titles with the grimacing caricature paintings.

The disc on the Arrow Academy release has three interviews on it with Bucci, producer Claudio Mancini and make-up artist Pierantonio Mecacci. It would have benefitted from a brief visual essay, extras that have really given added value to recent Arrow Academy releases.