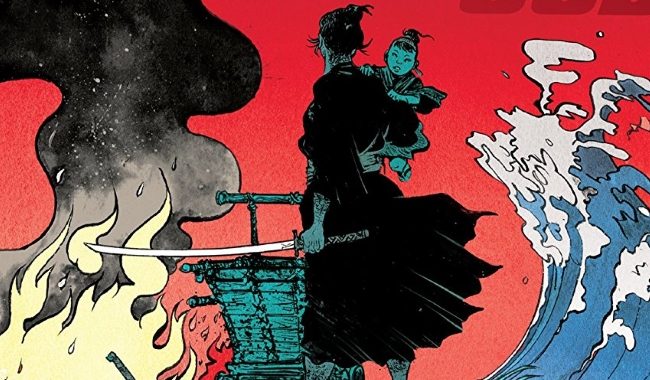 Back in the early days of video as home entertainment back in the late 1970s and early 1980s many of the popular films that were released were those that were cult horror and martial arts films such as The Exorcist, The Texas Chainsaw Massacre and Enter the Dragon (all 1973) all of which were certainly never shown on any of the three channels on terrestrial TV. Then there were the so-called video nasties, films that were normally low budget horror films or mondo flicks that had very little distribution outside of their own country. In 1980 producer Robert Houston edited together most of the second film and approximately the first 12 minutes of the first film in the Lone Wolf and Cub films from Japan, re-dubbed them into English and released the film through Roger Corman’s New World studio as Shogun Assassin. When the film was released on video it was soon hailed as a video nasty and faced the inevitable ban.

‘Lone Wolf and Cub’ had been a popular Manga graphic novel by Koike Kazuo and illustrated by Goseki Kojima and was first published in 1970. Kazuo was approached by the actor Tomisaburō Wakayama, the brother of producer Shintaro Katsu who said that they wanted to make an adaptation of Kazuo’s Manga tale. The story is set during the Edo Period in Japan (probably the 18th or 19th century) with a disgraced Shogun executioner, Ogami Ittō wrongly accused of treason. He takes his 3-year-old son, Daigoro and travels the lands in a wooden baby cart following his wife’s death on what he calls “the demon way of hell”. From the start he tests the 3-year-old to choose the coloured ball (which will mean his death) or his the sword (which will mean his protection). He chooses the shiny sword. Throughout the book and all six films presented on this Criterion Collection set Lone Wolf and his child are walking the lands when they are hunted down by all sorts of assassins and armies sent by Yagyu Retsudo, Ittō’s nemesis.

The final film was made in 1974 with the franchise continuing into the apparently less well made TV series which also starred Tomisaburō Wakayama and lasted for 3 years. Some of the extras on the disc are quite revealing, the best of which is an interview with the series original author, Kazuo never challenging the filmmakers as he recognised that the process of visualising a comic book or illustration is a very different process and particularly liked the visualisation of the violence and speaks fondly of the filmmakers including Wakayama. A superb collection released by Criterion Collection it includes all six films restored as a 2K digital restoration and includes Shogun Assassin, as well as an interview with Kazuo and another with Nozawa Kazuma, a biographer of Kenji Misumi. Other documentaries include an interview with a samurai master who takes about the code of the samurai and a feature length French documentary about the series made in 2005. The series is quite a revelation and while it could be argued that they are repetetive, they also have style making for a good set and are better than the until now better known Shogun Assassin.