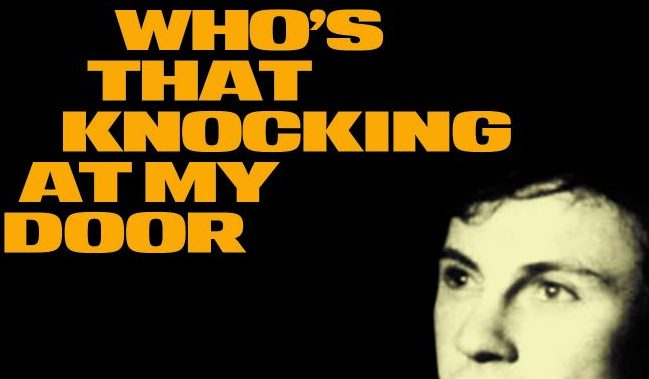 Martin Scorsese’s very first film showcases this Italian American’s precocious talent as a director. Released by BFI on dual format discs on 27th March, Who’s That Knocking at My Door does in places look like a film school project – which much of it was. Never the less, edited together from an unfinished project, Scorsese’s talent as a visual storyteller is strongly realised. The influence of French New Wave is also obvious in the film as he experiments with different stylea, but instead of a Marxist agenda as would be seen in a Jean-Luc Godard film Scorsese instead draws on American popular culture, street life growing up in New York and cinema.

Martin Scorsese was born to an Italian Amreican family in Queens, New York and moved to Little Italy in Manhattan as a child. He grew up with a strong sense of identity, strong Catholic convictions and spent much of his childhood in the cinema. He attended a New York Art School where he studied filmmaking. In the early to mid-1960s he made several short films. One of these was called ‘Bring on the Dancing Girls’ made in 1965. Large parts of this film is edited into Who’s That Knocking at My Door; these are the scenes with a young Harvey Keitel running around with his young street hood friends. This was Keitel’s first experience in acting who was at the time learning his craft. On an extra on the disc, assistant director Mardik Martin talks about what a nice and accomodating young man Keitel was and already approached acting as a professional. The other major part of the narrative is the relationship between Keitel’s J.R. and the girl, played by Zina Bethune, an actress who previously to this film had only appeared in TV soap operas. This film was filmed in 1967 and was a short entitled ‘I Call First’. The final element that was added to make up Who’s That Knocking at My Door was the dream sequence with Keitel writhing on the bed with different nudes played to The Doors ‘The End’ (long before Coppola had used the Oedipal song in Apocalypse Now, 1979). The scene was shot in Amsterdam over two days in 1968. Scorsese had carefully storyboarded the whole film, of course this also meant that no footage was wasted and he could film much quicker on a low budget. The films drive comes from the macho and misogynistic J.R. and his friends who seem to have no understanding on how to talk to or treat women. When he meets the nice blonde and middle-class girl who seems to be modern, is clearly not catholic and interested to learn he struggles with his own inner demons. J.R. wants a proper relationship with this girl but holds some very odd views about women (classifying them as girls and broads), virginity and what a woman should be. This creates a conflict within between the changing times, the sexual revolution and Italian-American culture.

What is very evident here is Scorsese’s love of cinema. He has often spoken about John Ford’s The Searchers (1956) being one of his favourite films and the scene, the first shot between Bethune and Keitel, shot on the Staten Island ferry, he talks to her at great length about the film after noticing a still from the film while she is reading a copy of the French magazine, Paris Match. He tells her “everybody should like westerns. You can solve all your problems with westerns”. In another scene, as their relationship blossoms, J.R. takes the girl to see John Wayne in Rio Bravo (1959) and stills from the film are edited into the narrative to give a strong visualisation of watching the classic western, a very Godardian stylish effect with many edits and camera movements in the film recalling a Jean-Luc Godard New Wave film. Elsewhere Scorsese’s camera moves around using dolly and tracking shots as well as lots of close-ups for the violence and sex scenes as well as long shots from the top of New York buildings. This keeps the action moving and interesting.

Another element that is familiar from many Scorsese’s films is the rock and roll soundtrack. As he had in Mean Streets and Goodfellas, in which he used a late 50s and early 60s soundtrack, the music is perfectly woven into the visuals and uses an interesting mix of obscure songs but ones Scorsese probably recalls growing up on the streets. While not a classic in itself it is very interesting as a first film by one of the greatest directors of all time as well as being Keitel’s first time on camera. There is a 12 minute extra on the disc in which assistant director Mardik Martin talks about his experience on working on this film with Scorsese. He would go on to be a script writer on some of Marty Scorsese’s pictures. There is also a 2000 recorded partial audio commentary on the film by Scorsese and Martin. It could have perhaps benefited from some of the shorts the director made at the time which might have added some context, including his classic short, an indictment on the Vietnam War entitled ‘The Big Shave’ made in 1968.