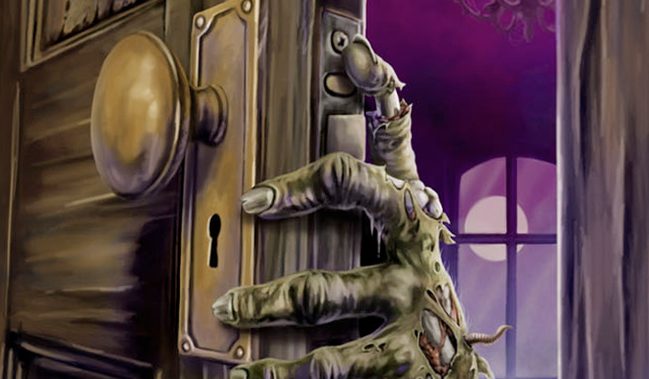 The first House film was made in 1985 and made as a comedy horror. For horror fans the comedy element in horror films does not always necessarily work. Sometimes it works really well and in the early 1980s some genuinely good efforts came out; think of An American Werewolf in London (1981), Gremlins (1984) and even one of the most acknowledged scary films of the decade, The Evil Dead (1981) and more recently with the likes of Shawn of the Dead (2004). It is often argued that comedy dilutes the horror, easing the tension, but The Evil Dead disproves this. And then there were films like Ghoulies, made the same year as the original House film, a pretty dreadful parody of Gremlins. House is essentially a haunted house thriller of The Amityville Horror (1979) type. The opening of the film is arguably it’s best part in which the elderly lady who lives in an old house, where she has lived most of her life hangs herself. In her will the house is left to her nephew whom she has brought up. The man, Roger Cobb (William Katt) has recently split from his television soap star wife after their son who had drowned in an accident at the back of the house, but the body was never found. Roger is also a novelist but has been suffering from writer’s block and nightmares about his time in Vietnam which he is trying to translate into his novel. He hopes moving back to the house where his aunt died and son disappeared the writer’s block will be unblocked. It soon becomes clear that demons and ghosts run through this house: the ghost of his hanging aunt (the most effective part of the film), an aggressive monster in the closet, his ex-wife transformed into a fat, hideous muppet like monster and the rotting zombie corpse of an old Vietnam comrade. On seeing all the films as a whole it is clear that this is the better film, but really that is not saying too much. The comedy and the clearly rubberised demons fail to raise too many laughs with perhaps the best laughs coming from Roger’s nosy neighbour who ultimately helps him, played by George Wendt, best known as Norm in the hit TV sitcom ‘Cheers’.

The second film, with the jokey title House II: The Second Story (1987) draws more on the comedy and less on the horror. In this sequel the plot begins with a familiar premise to the first film in which a young professional inherits an old mansion where his parents were murdered when he was a baby. He has moved into the place with his girlfriend and another young couple. While going through some of the old things in the house, Jesse (Arye Gross) finds papers that suggest there is an old Mayan crystal skull with magical powers in the house connected to an ancestor. They decide to dig up the grave of this old prospector great-great-grandfather. They discover that he was buried with the skull and when they unearth him he comes to life and is found to be a friendly zombie. Together they fend off beats and demons after the skull and even fight a pterodactyl. All the characters in the film are annoying with the viewer wishing them ill.

The third film, House III: The Horror Show (1989) was not a part of the cycle at all and there is no haunted house. This is more a continuation of the Nightmare on Elm Street series as we see a cop (Lance Henriksen) haunted by his experiences dealing with a ruthless and violent serial killer, Max Jenke (Brion James). Fried on the electric chair, Jenke vows to the cop that he will return and butcher his family. True to his word he does just this as an undead bogeyman. In the US the film was released with the simpler title The Horror Show and was titled House III elsewhere. There is little to connect this film with the rest of the House series than the poster artwork and producer. It is a little confused but thankfully it has taken out the comedy element.

With House IV: The Reposession (1992) the slippery slope of quality slides further with this film which was only released direct to video. It returned to the haunted house theme and even brought back William Katt from the dead, although this time he has a different wife and child. Katt is killed off in a car crash early on in the film and his wife and now crippled child stay in the house her husband loved so much. Cue more ghosts and demons to haunt her out of the house as well as a corrupt realtor. There is also a suggestion of the ghosts being over an Indian burial ground. The ending is particularly hilariously bad as it parodies (?) Ghost (1990). Groan.

None of these films are particularly good. However, Arrow Video are once again to be applauded for the packaging. As a box-set, each film has received a 2K restoration and on each disc there are commentaries by producer Sean S. Cunnigham and the directors. In addition there are interviews and Making Of documenataries on each disc. In addition to poster and still galleries there is the splendid artwork for each film on the sleeve to each disc. All the films were produced by Sean S. Cunnigham, the director of the original Friday the 13th (1980)