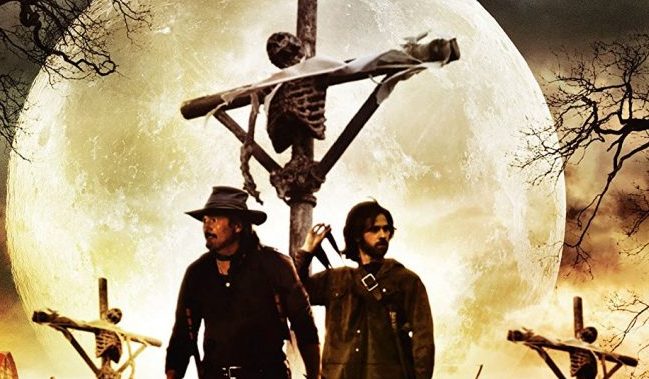 Released in the US in it’s original title The Stakelander, Stake Land II is a follow-up to the 2010 original film, Stake Land. This and the original film are a post apocalyptic dystopian horror. There have been a whole sub-genre of films in which a financial crash or post apocalypse have led to a collapse in the social order with a small sub-set of humans fighting for survival. Granted not all these films have zombies, vampires or other epidemic as the obstacle to survival.  Recent others include The Book of Eli (2010), The Rover (2014) The Road (2009) and a whole slew of zombie films (28 Days Later, 2002) and vampire films (30 Days of Night, 2007), but the origins lie with Richard Matheson’s 1954 novel, ‘I am Legend’, filmed of course many times. In Matheson’s book (and films) a lone survivor in a city battles against a vampire outbreak and searches for survivors and a living human colony.

In the original Stake Land a young teenage orphan, Martin tries to survive a global pandemic of people who have turned into vampiric zombies. He is taken under the wing by an older man, a vampire hunter who goes by the name of Mister. Together they fight off the vampires and learn to survive and learn trust. Stake Land II opens several years later than the first film ended, with Martin (Connor Paulo) separated from Mister (Nick Damici) and in search of him. He is wandering the badlands, fighting off the zombies. Martin is also seeking revenge for the murder of his wife at the hands of a one-eyed Tilda Swinton lookalike vampire queen called The Mother (Kristina Hughes) who is also after Mister for taking her eye. Martin takes sanctuary in a farmhouse where he is given shelter by an older couple who feed him (food and water are also a rarity). As it turns out they have drugged him to kill him for meat. Delirious he fights and manages to kill them both. As another vampiric zombie attacks he is saved but sold into slavery where he is forced into a gladiator fight with… Mister. The two men escape and make their way to an outpost self-made fort with a ferral teenage girl that Mister has also saved. Mother rounds up on the fort with her band of vampires as well as the religious sack cloth cloaked order they team up with.

Part of the problem with Stake Land II is that there is little to distinguish it from other similar films, including those mentioned at the beginning of this review. It is suitably dark and moody and actually quite nicely shot by newcomer Matt Mitchell. Shot in the bleak countryside of Saskatchewan, Canada adding to the films moodiness. Its slow pace works fine and is in ways more akin with less action than the first film, that has to be said was one of the most entertaining vampire films of the last 10 years and is more in tune with the aforementioned films and does little to erm, raise the stakes.

There are no extras.