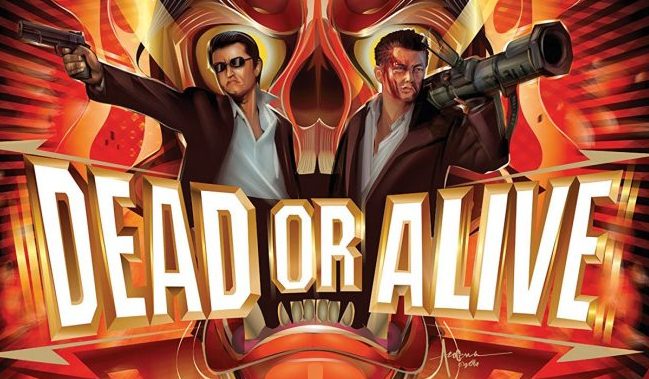 Extreme. That is the best way to describe most of Takashi Miike’s films. They are raw, vulgar and even crude, yet they have a style that is unique to this director. Less than a couple of months ago Arrow Video released Miike’s Black Society Trilogy (which included The Shinjuku Triad Society, 1995, Rainy Dog, 1997 and Ley Lines, 1999) three films very loosely linked with immigrants (usually Chinese) involved in one way or another with drugs, gangs, killings and prostitution and often centered around a seedy quarter of Tokyo at the centre of the stories. Fitting then that Arrow follow up these films with his better known Dead or Alive trilogy. Again, the themes link the films including the again common theme and all three star Show Aikawa and Riki Takeuchi who play different roles in each of the three films.

The first film, Dead or Alive (1999) opens with a 6 minute montage scene, a feast of violence, strippers, drug taking, fights and ending with a nuclear blast, setting the tone in an exciting way for the rest of the film and the trilogy. Once this breathless scene has gotten out of the way the plot then takes over with Ryuchi (Takeuchi), a ray-ban wearing, black coated and cool gangster leads his immigrant Chinese gang in taking over Tokyo’s Shinjuku district. He meets his match with the laid back police detective, Jojima (Aikawa) who is on his trail. The ending on the waste ground is to be seen to be believed.

This is the best film in the trilogy and has some of the most touching scenes of Miike’s career such as the set-up for the car bomb scene. But like most of Miike’s films it gives way to its excesses and extremes. The next film, Dead or Alive 2: Birds (2000) have the same actors reappear, although this time they are in very different roles, almost unrecognisible from the first film. This time they are rival hitmen who attempt to hit the same yakuza boss at the same time. Initially facing each other off they soon realise that they are childhood friends and hide out together on an island while other yakuza search for them.

The final film, Dead or Alive: Final (2002) is the worst film in the trilogy. It has the look of a 1980s pop video shot on standard definition video with filters. In this film, supposedly set in Yokohama 50 in the future (much of it was actually shot in Hong Kong), the two actors pair up again to fight as alien super powered replicants and do battle with immigrant Chinese gangs. This film is bogged down with its excesses this time.

As well as being directed by Miike and starring the same principal actors in all the films, the first film was written and produced by Miike regular Tokishi Kimura, who had also written the script to the The Black Society trilogy of films. On an extra on the the disc, Kimura admits the influence that Mickey Rourke in Year of the Dragon (1985) had on Dead or Alive. This is one the more interesting extras on the disc as he covers his career making this series of violent movies. What is all the more remarkable is how meek Kimura seems compared with the more extrovert Miike.

There are a whole host of extras on the discs including interviews with both Aikura and Takeuchi, as well as Making Of features. Takashi Miike’s films are excessive, sometimes silly and often disturbing, but he invites the viewer just to enjoy the rush, such as that he provides at the open of Dead or Alive.