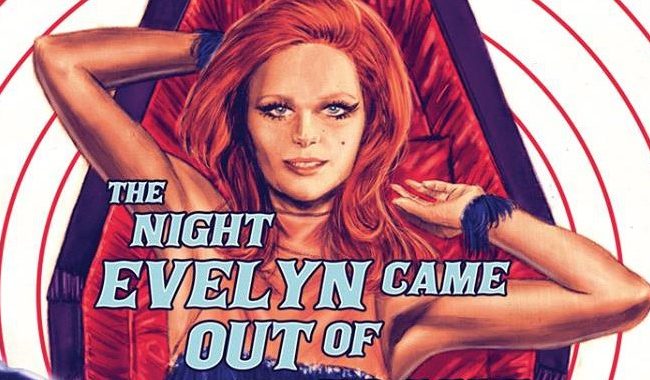 Yet another giallo thriller from Italy released on Arrow Video. This time it has been given the gothic horror treatment. Made in 1971, The Night Evelyn Came Out of the Grave was part of a two film box-set Arrow Video had released by the label May last year (the other film, The Red Queen Kills Seven Times is also to be released by Arrow Video). Both films were directed by irregular director, Emilio P. Miraglia who’s only other screen credits were for a war film, The Vatican Affair (1968) and three other minor films under the name of Hal Brady. Now released by Arrow Video both films can be brought independently, although I would have thought any giallo fans would want both.

The story opens with a man trying to escape from an asylum. The man is a lord, Alan Cunningham (Anthony Steffen) who is later released from the asylum. Lord Cunningham has been traumatised since the death of his wife and since a seance has been driven mad by visions of her. He lures prostitutes back to his mansion, always red heads (which, despite the film being supposedly set in Britain is quite clearly Italy), ties them up and whips them before often killing them. Before Evelyn had died he discovered that she had been having an affair with an unknown person. He is quite clearly insane. But when his friend takes him to a strip club he is introduced to a stripper, Gladys (Marina Malfatti) whom on a whim he marries. It’s not long once back at the gothic pile that Alan, with leanings towards madness, his unhealty obsession with his dead wife come to the surface which threatens Gladys. When Gladys starts to hear and see things that go bump in the night she begins to fear for her own sanity.

Although this was one of many giallo thrillers to come out of Italy, but has all the hallmarks of a gothic horror: hauntings, familial histories, will readings, madness, a threatened heroine as well as a crumbling and shabby mansion. As critic Stephen Thrower notes on a visual essay on the disc there are tensions between the gothic and the modern, the more familar home of the giallo thriller. Also like many a giallo the acting is quite atrocious, even when watched in the original Italian rather than dubbed English, both of which are available on this release. The director, Miraglia also shows some inexperience as a director such as the poorly choreographed fight sequence towards the end of the film. What the film does have though, again like many of its contemporary films of this type is style. It is also camp with Erica Blanc’s striptease as she emerges from a coffin. But equally the film is also misoginistic, as the camera seems to revel in the sado-masochism, the whippings, as well as the sexually motivated murders and the string of prostitutes, strippers and femme-fatales. As with many exploitation films of its type it also has plenty of nudity, underscoring some of the misogyny further.

As usual with Arrow Video it is a good package which includes a reversible sleeve, Thrower’s visual essay as well as several archival featurettes (mostly from 2006) including interviews with the films co-star, Marina Malfatti. The other main actor in the film, Anthony Steffen was better cast at home in spaghetti westerns that he regularly featured in rather than in films such as giallos. Arrow Video are building up a good oeuvre of giallo films in their back catalogue.