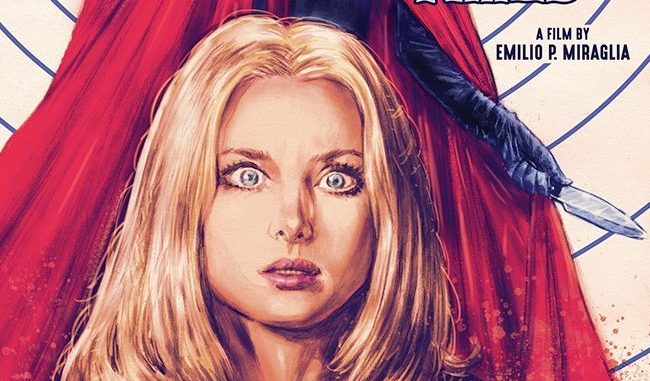 Classic giallo. A family curse is underscored by a painting on a wall in which a black queen holds a dagger over her sister dressed in red. This is the telling of a family curse as relayed by the wheelchair bound grandfather to the aristocratic Wildenbrück girls, two rival childhood sisters. The curse predicts that every 100 years or so one sister will murder the other and that the murdered sister will return from the grave to kill 7 times. The blonde Kitty is constantly tormented by her dark haired sister Evelyn (a reference to the film’s director, Emilo P. Miraglio’s previous giallo film also released by Arrow Video, The Night Evelyn Came Out of the Grave, 1971). The grandfather is horrified by the machinations of the evil Evelyn and fears that the family curse may return at the hands of Evelyn. Years later, true to form, Evelyn is killed and is drowned in a fight with the now grown Kitty (Barbara Bouchet). And so the family curse plays out when a series of murders begin to happen where the killer is a red cloaked woman who stabs her victims with a dagger. Naturally Kitty believes and fears that Evelyn is back to kill. Added to this, in typical giallo style other siblings are thrown into the mix creating red herring after red herring.

Unlike The Night Evelyn Came Out of the Grave this is more straight giallo that, while it has gothic elements has the more typical modernist and stylish (1970s) look so typical of these films and is mostly shot in and around the Wurzburg region of Bavaria. The colours are very strong and therefore benefit better than most from the modern technology with the lush 2K transfer on a 2.35:1 aspect ratio. This works much better than it would’ve done on a video release. Interestingly while some of the cast are Austro-German and it was shot for the most part around Wurzburg the film never saw a release in Germany until released on video in the 1980s. As already stated, the film benefits from a lush print with rich colours. Part of this is down to the film’s cinematographer, Alberto Spagnoli who had also richly used red as a signature colour in Michelangelo Antonioni’s first film, The Red Desert (1964), Antonioni’s first colour film and another film in which the colour red is strongly emphasised. Another great addition to the film is a fantastic energetic thriller score with some class kitsch music provided by Bruno Nicolai. If it sounds like Ennio Morricone, this is hardly surprising as Morricone himself was influenced by the older Nicolai.

This film had previously been released on Arrow Video as a double feature with the aforementioned other film by Miraglio, The Night Evelyn Came Out of the Grave but are now released as separate films. The Red Queen Kills Seven Times is by the far the better of the two films but had Miraglio made any more films his skill as a director may have matured further. Little is known of Miraglio or what happened to him after he retired from filmmaking after 1972. The Red Queen Kills Seven Times also has some great moments such as the scene in which a red cloaked figure carrying a dagger runs down a corridor towards the viewer and some well constructed murders predicting later American slasher films.

Extras are similar to those in content to The Night Evelyn Came Out of the Grave including a visual essay of the film by Stephen Thrower as well as a new interview of one of the film’s co-star’s, Sybil Danning. There are also some archival interviews with cast and crew members. A stylish giallo from an otherwise little known director.