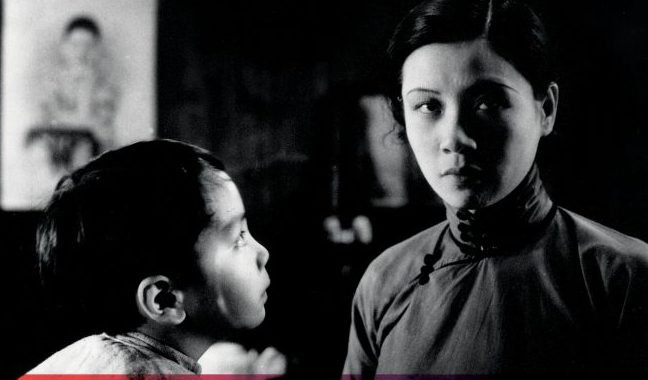 The Goddess is an at times hard to watch and sad universal tale led by an outstanding performance by a popular actress from the ‘Golden Age of Chinese Cinema’, Ruan Lingyu. It is the story of a woman living in a big city (her name is never mentioned in the film adding to her universality). She lives alone with her baby and survives by earning a living as a street prostitute. One day the police carry out a raid through the streets leading her to take shelter in a premises belonging to a Boss Zhang. He agrees not to give her away if she stays the night, which she does. The next day he tells her that she is now his posession and moves in with her and her son, demanding to take her money to pay for his gambling dates. He even holds her to ransom by threatening to sell her child. Over time she learns to hide the money from him in a hole in the wall and her son, Shuiping grows into a nice young boy, but is soon ostracised by the mothers in the neighborhood who call him an “unfortunate child”. Eventually she saves enough money to put him into school where he is happy and does well. However, her job and the fear of exposure is never far behind her.

Released by BFI this silent film is a gripping drama. Do not expect a happy ending because there isn’t one. This is the 3rd early Chinese film released by BFI in the past 2 years following the releases of Spring in a Small Town (1948) and the epic The Spring River Flows East (1937) released on DVD just a couple of months ago. The Goddess is a silent film (although the first sound film in China was in 1931, many continued to be made as silents through the 1930s) and benefits from being recently restored by the China Film Archive and a new score added by Zou Ye performed by the China Philharmonic Orchestra. There are a couple of areas on the film that show signs of disintegration but is generally the quality of the film is very good.

Ruan Lingyu brings a great deal of pain without much in the way of histrionics to her role. However, her own life was marked by tragedy and it could be argued that she brought a great deal of this to her role as the prostitute under scrutiny by society but trying to do the best for her son in a generally uncaring society (the headmaster to Shuiping is one of the few people who shows signs of caring and humanity). In her own life Lingyu had lived with a gambler (also called Zhang) when she was 16. After she eventually split with him she ended up with a tea magnate who also made her life miserable. Just one year after completing The Goddess Ruan Lingyu committed suicide, aged just 24.

In the West the title of the film has gone through a number of translation changes. While ‘The Goddess’ is a literal translation of the film’s original title, shennü which can be translated as both goddess or a slang word derivation of goddess, meaning prostitute.

There are no extras on the disc, which is unforunate as these would add some contextualisation.