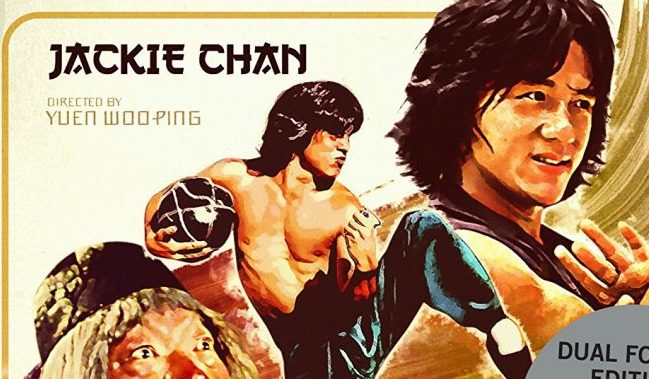 In the Police Academy films, the character of Larvell Jones’s (played by Michael Winslow) schtick is to mimic sounds, accents and voices. In one such scene he mocks the martial arts films with his mouth moving differently to the (dubbed) spoken words while making exaggurated sounds for karate chops. He is of course mocking the poor dubbing and exaggurated foley sounds in karate films, most famously those of Jackie Chan. In Honk Kong Chan rose to fame following the success of Snake in the Eagles’s Shadow (1978) which was swiflty followed by Drunken Master (also 1978). While the first film was a success, the follow-up film was an even greater success, both at the box-office and critically. Chan had already appeared in over 30 films by the time he made Snake in the Eagle’s Shadow. It has to be added that both these films were intended to be comedies, even if the humour is 100% broad slapstick. Released by Eureka! the film is thankfully also in Cantonese as well as English.

The story centres on the mischievous scamp that is Wong Fei-hung (Chan) who is continually finding himself in scrapes and fights or brawls. In one such fight he meets his match with an older woman after he flirts with her ward (who later turn out to be an aunt and a cousin). His father encourages him to train in the discipline of martial-arts but this lands him in further trouble. At a restaurant he pigs out at the patron’s expense, again resulting in a brawl. He finds unexpected support from an old man who is also a diner at the restaurant who helps Wong escape. It turns out that this helper is Beggar So, the Drunken Master (Yuen Siu-Tien). Wong’s father had hired this maverick master to train him, despite a reputation for injured students. Beggar So puts him through a rigorous training schedule including teaching him ‘the Eight Drunken Immortals’, his own style of drunk training where he now skilfully he can take on his opponents.

It would be of little surprise to know that Jackie Chan was the successor to the late Bruce Lee and the then popular genre of martial-arts cinema after Lee died in 1973. Chan was recognised by the director Yuen Woo-ping and producer Ng See-Yuen, that Chan not only had the skill and kung-fu grace of Lee but also that he had a knack for comedy which started with Snake in the Eagle’s Shadow. The comedy is very broad with the unsophisticated style of comedy that in places looks little different from soft porn comedy. The drama is generally not well put together with the director demonstrating little in the way of cinema art. The exaggurated foley is also hilariously bad and repetetive as is Chan’s gurning. What it does have though is the extraordinary poetic grace and balletic moves of the action, saturated throughout the film with the fight sequences mostly shown in full length. Chan’s career was therefore set as he would repeat the formula, if at times with mixed results. No matter how much action there is in the film the fight sequences never fail to impress and if your lucky may even raise a titter.

The extras, as this is in the Eureka! Masters of Cinema series are resplendent with an interview with Chan who discusses both films (a shame that Snake in the Eagle’s Shadow is not included on the disc, even if these kind of films are not my favourite of genres), their legacies and his recollections (mostly the injuries he received). Among other extras is a 41 minute discussion of the film and its origins by Asian cinema expert, Tony Rayns. The film does look good with the 4K restoration of the film. Often we imagine or have seen these films in very poor VHS or worn film copies, so whatever your thoughts on martial-arts films, especially the comedies it at least is good to look at.