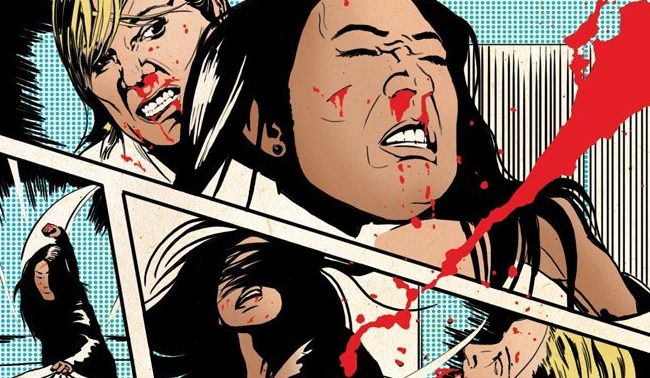 For the theatrical release poster for Catfight we see a blooded and bruised Anne Heche face to face with an equally battered and bruised Sandra Oh. The cover to the new Arrow release of the film illustrates a comic strip fight between Oh and Heche, indicating comic like and violent fighting between two women. The three very violent bloody brawls that takes place between the two women in the film is only comic like in the violent exaggeration of the fights; the foley artists were put to work in exaggerating the kicks and punches to heads and stomachs. These women can certainly go some to go at it so many rounds. In between the bouts the plot is a smart and caustic black comedy satire reflecting our times.

The film opens focussing on two concurrent study of the lives of two women. Veronica (Oh) is unhappily married to Stanley (Damian Young). Stanley has just won a contract to supply arms to the Pentagon on the eve of a new war in the Middle East when the couple attend a cocktail party to celebrate on this war profiteering that has the potential to make them very rich. Their maid says with a tongue firmly in her cheek “we’re going to war because they won’t do what we say”. Together they have a son who is 16 and professes an interest in being an artist which both parents scoff. Meanwhile, the population is pacified by a satirical TV show that is interrupted by the fart machine man. At the party Veronica runs into Ashley (Heche), an old college friend who stopped being friends when Ashley came out that she was gay. Ashley is a struggling artist who makes bleak paintings (similar in a way to Keith Haring, but darker in subject matter). She is working as a waitress at the party with her girlfriend, Lisa (Alicia Silverstone) whom she is wanting a baby with. At the party there are a few pointed remarks between Veronica and Ashley. When Veronica is told to go home by her husband for being drunk she literally bumps into Ashley on a stairwell and the pair begin to fight, exchanging blows. Veronica falls unconscious down the stairs. She wakes from a coma two years later and learns that she has not only lost all her money for the hospital bill, but her husband has blown his brains out and her son has been killed in the war in the Middle East. In the meantime Ashley has become a successful artist and is now pregnant having been artificially inseminated. It takes Veronica some to adjust to her new circumstances and getting used to having nothing but plots to enact her revenge.

This satirical black comedy shows signs of mixing styles of the socially destructive characters found in a Todd Solondz black comedy with the tragedy and dramatic waspish characters of a Woody Allen film. The link with Solondz is highlighted further by the appearance of Dylan Baker from Solondz’s Happiness (1998) who here plays the uncaring comatose doctor at the hospital. It’s clear that the film was made in potential Trump or Clinton America and is reflecting on another prospective war in the Middle East as the American nation is pacified into going to war, unlike Obama’s more isolationist approach to global policing. When Veronica moves to the country to move in with her eccentric New Age Aunt Charlie (Amy Hill) she learns from her aunt that she names all the trees and gives them personalities: “Bernie [he’s] sweet and grounded; Hillary, strong but a little untrustworthy; and Donald – he’s an asshole!” It does feel in some places that the shadow of Kubrick’s Dr. Strangelove (1963) is present in the film, especially when the country blindly goes into another war in the Middle East. It is only when Veronica wakes from her coma two years later that she reaps the consequences of that action. Ashley, meanwhile has unconsciously benefitted from the zeitgeist consequences of war as the dark imagery in her art now finds a willing audience.

As in the politics in Trump’s America and during the circus of the Presidential race, there is something very animalistic and nihilistic about the relationship between Veronica and Ashley in which we see there are no winners only losers.

Extras include deleted scenes commentaries by the two leads and a fight choreography featurette, not available on the review disc.