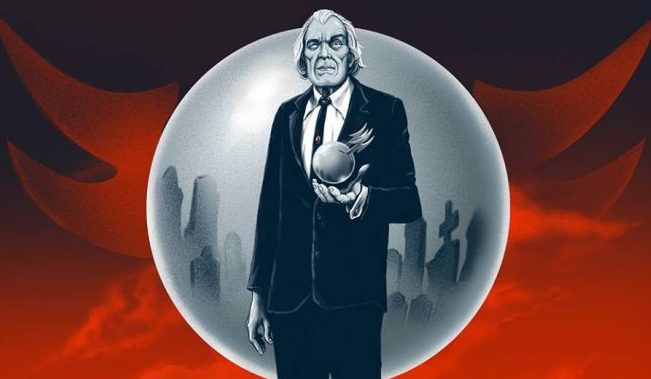 Phantasm quickly became a popular cult classic when it was released in 1979. Arrow Video have released all 5 of the Phantasm films on a box-set which includes, as is typical with the label a whole host of extras including Making Of documentaries and Behind the Scenes extras. What is clear watching all the films together is how scary and effective the first film was and, as they develop they become more bloody, less scary and as a result less effective. The first film became a big cult success and one of the key horror films at the end of the decade that clearly shows the influence in style of the likes of Dario Argento and some of the better horror films that came out of Italy throughout that decade. Each film continues from the moment that the previous film ends, giving it at least a narrative continuity, even if it becomes repetetive and conversely more confusing.

The first film is the most gothic in tone and the most chilling, set mostly around a graveyard and mausoleum. This is led in large part by the sinister funereal looks of ageing actor Angus Scrimm who plays the terrifying Tall Man, resembling something like an undead Scrooge. It opens, in gothic manner, during the funeral of a young man. He has been stabbed by a sexy siren-like woman while making out with her in a graveyard. This is one of a series of murders that has happened in the town. Friends of the murdered man include Jody Pearson (Bill Thornbury), his 13-year-old brother Mike (A. Michael Baldwin) and their friend Reggie (Reggie Bannister), a balding pony tailded ice cream man. Between them they believe that the evil stems from the graveyard and the mortuary and the deaths are connected to the funeral director, who they call ‘the Tall Man’. Mike too is suckered into being seduced by the siren in blue velvet when he is interrupted by Mikey who is being pursued through the midnight graveyard by an unseen beast. They uncover all sorts of sinister things going on including the murdered locals who are shrunk down to monastically cloaked monstrous dwarves; best of all the Tall Man uses flying orbs with knives that plant themseles into the victims heads. The film really spins out of control towards the end with gateways to other worlds, midget monsters in barrels sent as slaves to the other world and those believed killed coming back.

The sequels changed pace. One of the common threads that linked all the sequels that differed from the original film was that the effective chills and shocks from the first film became less. They were now mystery road movies with a science fiction element. As the films progressed, the eccentricities from the first film are exaggurated further. The main characters are in all the films (except in Phantasm II, 1988 in which the Micke character is played by James LeGros), including Scrimm as the Tall Man and in each case are killed off and return back. Reggie is stabbed and left for dead by the woman in the first film but becomes the main hero in all the subsequent films. Each of the sequels, no matter how large the gap in years between the films being made were continues, making them almost like cliffhangars. This is interesting given the space between each film and whether a sequel was going to be made in the first place. Phantasm II was released theatrically but the other three sequels were made direct to video/DVD.

The creator of the film and the entire series was Don Coscarelli. Coscarelli was only 24-years-old when he made the first film and as well as directing, he also produced, wrote, shot and edited the film. The final film in the series, Phantasm: Ravager (2016) is very recent (sadly Scrimm, the films main asset died during shooting) and this film was directed by newcomer David Hartman and marks the final installment. But the sequels are only worth watching for the die hards (which I would guess are those who are buying a Phantasm box-set in the first place). Yet, despite it’s budget (which markedly had a bigger budget and none the better for it) at a meagre estimated $300, 000 the first film is slick and has some of the best shocks of the decade, aided in part by a creepy score by Fred Myrow and Malcolm Seagrave with some superb sound design to add to the scares.

The extras on the disc are plentiful and on each disc there are recollections by the cast and crew on all the films as well as a large focus on the most iconic aspects of the series, both Scrimm and the murderous flying orbs. Where the acting for the most part in all the films are poor there is, never the less a certain style to all the Phantasm films.